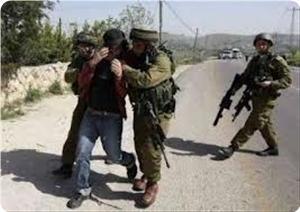 Dozens of Israeli military jeeps invaded various areas in the northern and southern parts of the occupied West Bank, broke into and searched dozens of homes, and interrogated the residents after forcing them out of their homes.Local sources in Beta village, south of the northern West Bank city of Nablus, have reported that dozens of soldiers invaded the village, and broke into the home of Mohammad Dweikat before forcing him and his family out of their property.

Dweikat, a political official of the Democratic Front for the Liberation of Palestine (DFLP), stated that the soldiers violently searched his home, causing excessive property damage, and used it as an interrogation facility.

He said that the soldiers detained more than twenty residents from the village, and interrogated them in his home for several hours.

The soldiers warned the residents of harsh consequences should they approach the main road where Israeli settlers drive to and from their illegal settlements.

Furthermore, soldiers invaded Kufur Qaddoum village, near Nablus, and kidnapped two young men, and a child, before taking them to an unknown destination.

Army also invaded Hebron city, in the southern part of the occupied West Bank, and kidnapped a youth identified as Bilal Abdul-Aziz.

Local sources in the city have reported that the army kidnapped two children in the city on Tuesday at night.

Clashes have also been reported in the Al-Arroub refugee camp, north of Hebron, after dozens of soldiers invaded it.

It is worth mentioning that, on Tuesday at dawn [September 10, 2013], dozens of soldiers invaded the camp, violently broke into homes and searched them before kidnapping at least 17 Palestinians.

Earlier on Wednesday, soldiers installed several roadblocks in various areas, west of Jenin in the northern part of the occupied West Bank.