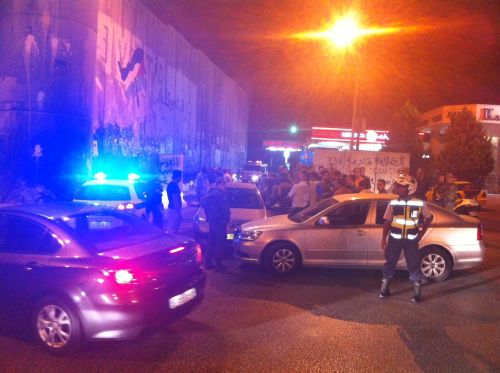 Israeli and Palestinian sources have reported that three Palestinians, members of the same family, have been injured after being rammed by a settler’s vehicle near the Gush Ezion settlement bloc, south of the West Bank city of Bethlehem.Local sources said that a man and two women, from Um Salmouna village, have been injured in the incident, and that the man, Nidal Hayyan, 30, suffered serious injuries and was moved by an Israeli ambulance to Hadassah Israeli hospital in Jerusalem.

The two women suffered moderate-to-serious injuries, and were also moved to Hadassah.

In related news, the Palestinian District Coordination Office (DCO) handed the Israeli DCO two settlers who entered Bethlehem after being involved in a traffic accident near Bilal Bin Rabah Mosque, north of Bethlehem.

On Monday evening, September 9 2013, an Israeli military vehicle invaded the Beit Or Al-Tihta village, west of the central West Bank city of Ramallah, and rammed a child crossing the street.

On July 2 2103, a young Palestinian man was killed after being rammed by and Israeli military jeep as the army invaded Doura town, near the southern West Bank city of Hebron.

On Sunday May 26 2013, a 7-year old child was injured after being rammed by a settler’s vehicle In Hebron.

On Wednesday May 22, a 9-year-old child was seriously injured after being rammed by a settler’s car in the As-Salayma neighborhood, east of the Ibrahimi Mosque, in Hebron.

On the same day, a 16-year-old child identified as Marwan Zackariah ‘As’ous, suffered serious injuries and was moved to the Rafidia Hospital, after being rammed by a settler’s car at the Beta Junction, south of Nablus.

On May 14, Hanin Bassem Al-Ja’bary, 7, was injured after a settler rammed her with his vehicle close to the Ibrahimi Mosque, in the Old City of Hebron. The settler fled the scene.