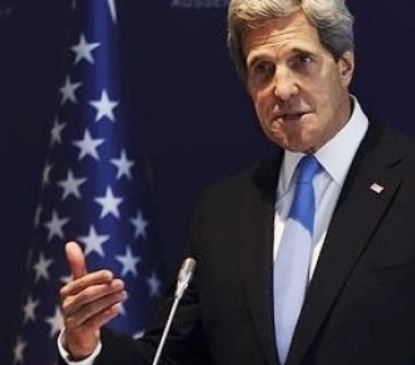 Israeli sources have reported that United States Secretary of State, John Kerry, will be arriving in the region this coming Sunday to hold talks with Palestinian and Israeli officials to discuss the ‘progress of political talks’, and the situation in Syria.Israeli daily, Haaretz, has reported that Kerry will be holding a meeting with Israeli Prime Minister, Benjamin Netanyahu, and a number of Israeli officials.

Haaretz said that Kerry would be holding talks with Netanyahu regarding the political talks with the Palestinians, and the latest diplomatic moves aimed at “stripping Syrian President, Bashar Assad, of his chemical weapons”.

Kerry’s meeting with Netanyahu and Israeli officials will be followed by a meeting with Palestinian President, Mahmoud Abbas, at his presidential headquarters in the central West Bank city of Ramallah.

Last Sunday, Kerry held a meeting Abbas for several hours in London, and discussed the “developments in direct peace talks that were resumed on July 14 under direct American mediation.

The talks are held away from the media, while various reports and statements indicated that no real progress was made, especially due to Israel’s ongoing violations, including its escalating illegal settlement construction and expansion activities, and its assaults that led to dozens of casualties among the Palestinians since the talks started.