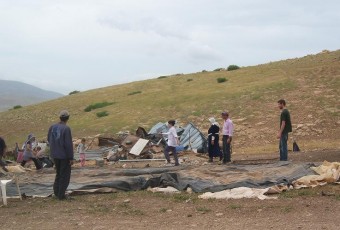 As part of ongoing violations against the Palestinians, living in small villagers, in the West Bank Northern Plains area, dozens of Israeli soldiers invaded Khirbit Makhoul, and demolished homes and residential structures.Local sources said that dozens of Israeli military jeeps, and military bulldozers, invaded the village and started demolishing its structures.

The sources added that the villagers never received any notices or orders from the military, and never had the chance to legally challenge the Israeli decision.

The Palestinian News & Info Agency WAFA, has reported that the Israeli military attack led to the displacement of more than 120 persons.

He added that this attack is not the first of its kind against the village and its inhabitants.

WAFA added that the soldiers declared the village a closed military zone, and preventing journalists and residents from entering or leaving it.

The small village is located between a number of illegal Israeli settlement, and an Israeli army base.

Palestinian Bedouins have faced decades of repression and forced removal by Israeli authorities as a result of this refusal to recognize their legitimate claim to continue to live on their ancestral land.