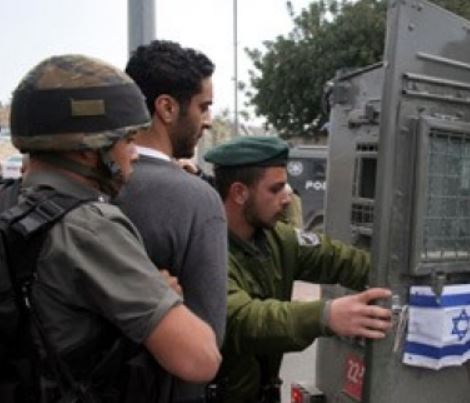 Dozens of Israeli soldiers invaded on Monday at dawn [September 16 2013] the southern West Bank district of Hebron, and kidnapped five Palestinians, including a son of an imprisoned Palestinian legislator. At least fifteen Palestinians have been kidnapped by the army in different parts of West Bank.Local sources have reported that the army broke into the home of legislator Hatem Abu Qfeisha, who is still imprisoned by Israel, and kidnaped his son Anas, 17, and his brother Sobhi Qfeisha.

Mohammad Ayyad, media spokesperson of the Popular Committee against the Wall and Settlements, in Beit Ummar town, stated that the soldiers also invaded the town, and kidnapped Mohammad Yousef Ikhlayyel, 18.

Ayyad added that the kidnapped Palestinians have been cuffed, blindfolded, and were taken by the soldiers to an unknown destination.

Dozens of soldiers also invaded the Al-Arroub Refugee camp, and kidnapped one child after breaking into his family’s home.

The army claimed that the soldiers invaded Al-Khader after a number of Palestinian youths allegedly hurled stones at settlers’ vehicles driving on a bypass settler road, paved on roads that belong to the residents.

Soldiers kidnapped at least 15 Palestinians in different part of the occupied West Bank during various invasions carried out on Monday at dawn. The army at the Al-Karama crossing with Jordan has also kidnapped a Palestinian youth from the Jenin refugee camp.

An Israeli military spokesperson stated that the arrests have been carried out in Irtah village, near Tulkarem, Dir Estia near Salfit, Qalqilia, Al-Jalazonerefugee camp near Ramallah, Beit Ummar and Beit Awwa near Hebron, and in Bethlehem.