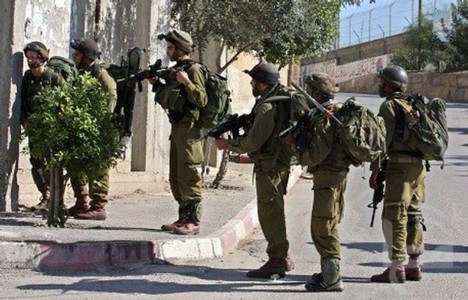 Tuesday at dawn [September 17, 2013] Israeli soldiers invaded various areas in the occupied West Bank, broke into dozens of homes, and searched them, before kidnapping at least nine Palestinians.Local sources in Beit Ummar town, north of the southern West bank city of Hebron, have reported that dozens of soldiers invaded the town, violently broke into and searched several homes, and kidnapped two residents.

The two have been identified as Aktham Yousef Ikhlayyel, 20, and Zein Hashem Abu Hashem, 17.

Mohammad Awad, coordinator of the Popular Committee Against the Wall and Settlements in Beit Ummar, said that the invasion started at four at dawn, and that the army fired several gas bombs and concussion grenades in a number of neighborhoods during clashes with local youths who threw stones and empty bottles at them.

Furthermore, dozens of soldiers invaded the town in Ithna, west of Hebron, and Yatta city, south of Hebron, in addition to the Al-Fawwar refugee camp.

Local sources said that the army closed main gate of the Al-Fawwar camp following clashes with local youths during which the soldiers fired several gas bombs and concussion grenades. The gate was reopened after 30 minutes of closure.

Two more Palestinians have been kidnapped after the army invaded ‘Aboud village, north of the central West Bank city of Ramallah, and two more in Betunia, west of Ramallah.

The two residents, who were kidnapped in Betunia, have been identified as Tha’er Fakher Ya’coub, and Abdul-Aziz Jibreel.

Several military jeeps also invaded Qalqilia city, in the northern part of the West Bank; and kidnapped two residents; the army claimed that the two are “wanted for security violations”.

Several Israeli military jeeps also invaded the Jenin refugee camp, in the northern West Bank city of Jenin, and shot and injured one youth, and kidnapped him.

Several injuries have been reported as the soldiers
opened fire at local youth protesting the invasion.

On Monday, Israeli soldiers kidnapped at least fifteen Palestinians, including a legislator, in different parts of the occupied West Bank.