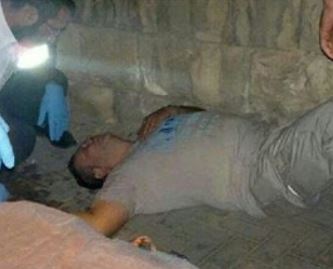 [Sunday evening September 15, 2013] an extremist Israeli settler attacked Palestinian children in Al-Isawiyya town, in occupied East Jerusalem, and was violently beating them before attacking a Palestinian man who tried to stop him. The resident, Maher Ahmad Abu Leil, 48, suffered various cuts and bruises when he tried to stop the assailant who targeted children playing in the area.

His sister said that he was heading to a Falafel shop when he noticed a settler using an iron bar to hit Palestinian children, and rushed to defend them.

The settler then struck the man to the head with the iron bar, causing severe bleeding, and concussion.

The man was then moved to the Hadassah Hospital in Jerusalem.

Local sources said that the police arrived at the scene and apprehended the settler.