Palestinian Wounded After Being Hit By Settler’s Car 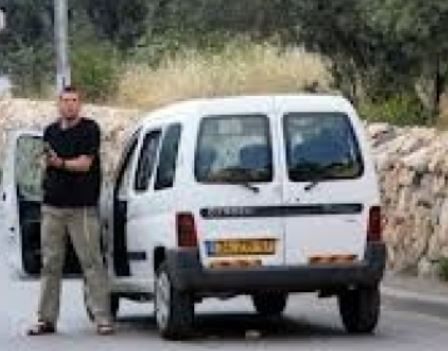 Silwan – Occupied Jerusalem, Palestinian medical sources have reported Saturday [September 20, 2013] that a Palestinian man was injured in what appears to be a hit-and-run accident with an Israeli settler who fled the scene, the Wadi Hilweh Information Center in Silwan has reported.The young man identified as Hisham Saleh Al-Abbassy, 28, suffered various cuts, fractures and bruises when the settler’s vehicle rammed him as he drove his motorcycle in Silwan.

The Wadi Hilweh Information Center stated that the incident took place near Al-Magharba Gate, and that the youth tried to avoid traffic in the area when a settler who was bypassing cars struck him and fled the scene.

A-Abbassy said that, after he fell onto the ground, he saw the settler driving away without trying to offer any help.

He added that Israeli police officers arrived at the scene and initiated an investigation into the incident.

On Thursday morning [September 19, 2013] A Palestinian child was injured after being rammed by a settler’s vehicle in an area south of Hebron city, in the southern part of the occupied West Bank.

Medical sources said that the child, Jenan Makram Rajaby, 9, suffered mild-to-moderate injuries; she was moved to the Hebron Governmental Hospital in the city.

Nearly two week ago, a Palestinian child was seriously injured after being hit by a settlers’ vehicle as she was walking home from school in Teqoua’ village, near the West Bank city of Bethlehem.

Several claims have been filed with the Israeli police and the military in the occupied territories regarding hit and run ramming incidents carried out by Israeli settlers, but no actual measures were taken on the ground.