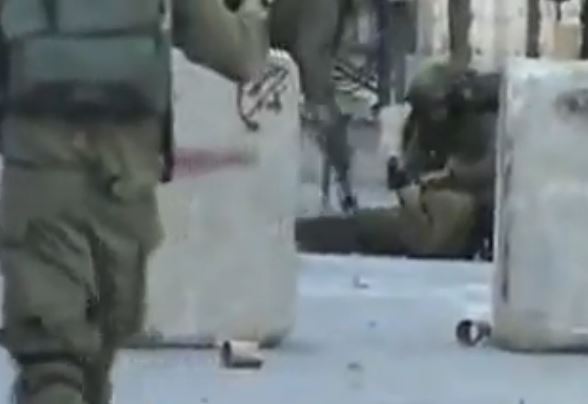 Sunday evening [September 22, 2013] Israeli military and medical sources have reported that an Israeli soldier was shot dead by a Palestinian sniper near the Ibharimi Mosque, in the occupied southern West Bank city of Hebron.The soldier was shot in the neck, and was moved to an Israeli hospital where he died of his wounds.
An Israeli military spokesperson stated that it was cleared for publication that the soldier died of one live round that struck him in the neck.

He added that the soldier was moved to the Shaare Zedek Hospital in Jerusalem, but died of his serious injury later on.

Israeli Ynet News quoted Dr. Danny Fink, a heart surgeon in the hospital stating that the soldier, identified as Staff Sergeant, Gal Kobi, 19, arrived at the hospital “essentially lifeless”, as he had no pulse, and no blood pressure, in addition to the fact that he lost a lot of blood.

The Israeli army said that the soldier was shot as he and his platoon where patrolling the Ibrahimi Mosque area (referred to by Israel as the Cave of Patriarchs) when they came under fire.

The army initiated a search campaign in the area, searching for a sniper, and possibly others involved in the incident, according to the military spokesperson.

Soldiers also completely sealed the entire area, including the Ibrahimi mosque, and removed hundreds of Jewish worshipers from the area.

The army closed all entrances of Hebron, installed dozens of roadblocks in the district, stopped and searched hundreds of Palestinian cars while inspecting the ID cards of the residents.

The Maan News Agency has reported that the army broke into and violently searched dozens of Palestinian homes in the area, and violently assaulted dozens of civilians, in their homes, before rounding up all males.

The agency added that approximately 150 young Palestinians were rounded up at the Tareq Ben Ziad Junction in the city. Most of them were released later on, but at least 15 were moved to an interrogation facility. Soldiers also confiscated dozens of mobile phones from the residents.

Furthermore, the army stopped a Palestinian ambulance transporting a woman in labor to a local hospital, and refused to allow the ambulance through.

The shooting of the soldier took place following clashes between dozens of residents and the soldiers after the army forced shut all Palestinian shops and stores in Bab Az-Zawiya area.

The Ynet News said that the army ruled out any connection between the killing of the soldier in Hebron, and the killing of Tomer Hazan, an Israeli soldier who was killed in the northern part of the occupied West Bank.

The Israeli soldier, went missing on Friday at night was found dead on Saturday morning near Qalqilia. The army arrested a Palestinian who allegedly killed him.

According to Israeli reports, a Palestinian identified as Nidal Amer, from Beit Amin village near Qalqilia, who also worked with the soldier at an Israeli restaurant, confessed to picking the soldier up, on Friday, and that the two took a cab to the illegal Israeli settlement of Sha’arei Tikva, located near Qalqilia.

He later took the soldier to a well close to the village of Snieria village, near Qalqilia, and killed him before dumping his body in the well.

During interrogation, Amar said that he wanted to hide the body of the soldier in an attempt to secure the release of his detained brother, Nur Ed-Deen, who has been imprisoned by Israel since 2003.