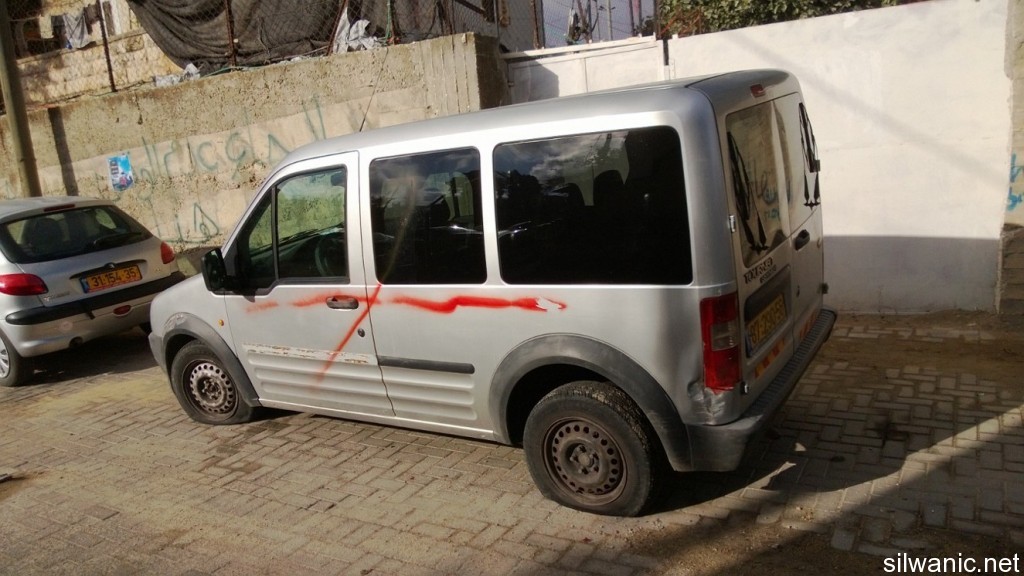 Sunday at dawn [September 22, 2013] A group of extremist settlers punctured tires of six Palestinian cars belonging to residents of Sheikh Jarrah, in the center of occupied Jerusalem, and wrote racist graffiti at a wall in the neighborhood.Local sources have reported that the cars belong to members Salem, Zahran, Mheisen, Hijja and Shamasna families.

The extremist also wrote Price Tag graffiti on a wall, and spray-painted some cars, before local residents noticed them and tried to catch them. The extremists fled the scene.

Local residents in the attacked area said that the escalating attacks continue to be carried out by extremist settler groups, especially amidst inaction on the part of the Israeli Police, the Wadi Hilweh Information Center, in Silwan, has reported.

The residents said that the Israeli Police has dozens of surveillance cameras in every neighborhood and alley of occupied Jerusalem, but are failing to apprehend the assailants.

The attack is the latest amidst dozens of attack carried out by extremist settler groups against the Palestinians in different parts of the country.

On 10 September 2013, some settlers from the group of ‘Paying the Price’ punctured tires of 3 buses and wrote racist slogans such as ‘Death to the Arabs’, ‘Stone Terrorists’, and ‘Paying the Price’ in al-Thawri neighborhood in Selwan village, south of the old town of occupied Jerusalem.

On Tuesday [August 27, 2013] Local sources in Beit Safafa town, in occupied East Jerusalem, has reported that a group of extremist Israeli settlers punctured the tires of 10 Palestinian cars in the town, and wrote racist “Price Tag” graffiti.

A week ago, Israeli extremists threw a Molotov cocktail at a Christian Monastery in the Deir Jamal area, between Jerusalem and Ramla.

Dozens of Price Tag attacks have been carried out against Churches, Mosques, Islamic and Christian graveyards.