Nine Palestinians Kidnapped By The Army In West Bank 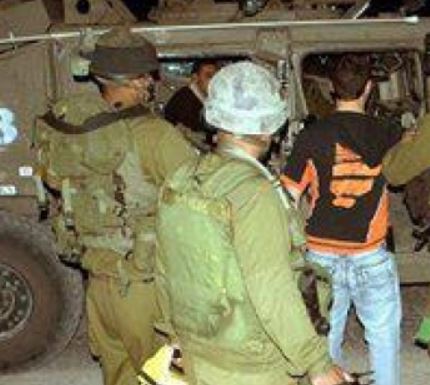 Local sources in Bethlehem have reported that dozens of soldiers invaded Teqoua’ village, east of the city, broke into several homes and kidnapped one resident identified as Odai Abu Mfarreh, 23.

Dozens of soldiers also invaded the nearby town of Beit Ummar, and kidnapped a university student identified as Mohammad Ahmad Abu Maria, 23.

Another resident has also been taken prisoner in Hebron city.

All of the kidnapped were taken to various Israeli military and security centers for interrogation.

In Jerusalem, undercover soldiers of the Israeli army kidnapped Baha’ Abu Sbeih, in the Al-Aqsa Mosque in occupied East Jerusalem, and took him to a police station in the Old city.

Abu Sbeih works for the Al-Aqsa Reconstruction Committee, run by the Ministry of Islamic Waqf and Endowments in the city.

The Palestinian News & Info Agency (WAFA) has reported that the resident was taken prisoner when Muslim worshipers confronted Israelis trying to break into the mosque during early morning hours.

Israeli sources said that hundreds of religious Jews headed to the mosque, and the Al-Buraq Wall, area marking the Jewish Sukkot holiday.

According to the Al-Aqsa Foundation for Islamic Waqf and Heritage, a number of Israeli extremists conducted provocative acts against Muslim worshipers, and that the Israeli army and police prevented hundreds of Palestinians from entering the area.

It added that a prominent extremist was leading a guided tour explaining the “plan to destroy the mosque to rebuild the temple”.