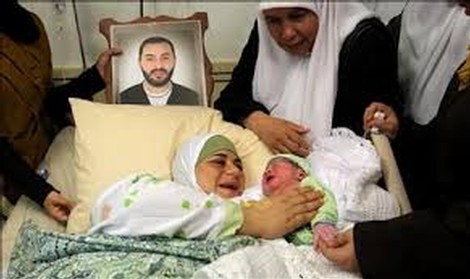 Saturday [September 21, 2013] the Israeli Prison Administration at the Nafha Detention camp, in the Negev Desert, refused to allow detainee Abdul-Karim Reemawi, from visiting with his new born son, and his wife, as the child was conceived through artificial insemination using smuggled semen.The Prison Administration said that the detainee never fathered a son before he was taken prisoner, and that it does not recognize his son as the father’s semen was obtained illegally.

Israel does not allow any conjugal visits to Palestinian prisoners, held in its various prisons and prison camps.

Head of the Palestinian Detainees’ center, former political prisoner, Ra’fat Hamdouna, stated that “the Israeli decision is flawed” and comes as a punishment for the detainees who managed to father children despite Israel’s illegal measures and unconstitutional laws.”

He said that several detainees, sentenced to high very terms, managed to father children while behind bars through artificial insemination using smuggled semen due to the Israeli restrictions.

Hamdouna further stated that all related international laws and treaties guarantee the right to family visits, especially between parents and their children, and that that detainee will file lawsuits against Israel for its arbitrary and illegal actions.

He added that there are around 18 Palestinian detainees who will father children, in the coming few months, after their wives have been inseminated using the same technique, while additional sixty semen samples collected the same way from additional detainees are now preserved in Palestinian labs while the wives are being prepped for the procedures.

Several Palestinian detainee have successfully been through the entire procedure, and fathered children. The first detainee who managed to father a child through “smuggled sperm” is Ammar Az-Zibin, 28.

He was kidnapped by the Israeli army 15 years ago, and was sentenced to 37 life terms; he managed to father a child, in August of last year, after being able to “smuggle” his sperm that was carefully carried by his visiting wife to a local fertility center in the northern West Bank city of Nablus.