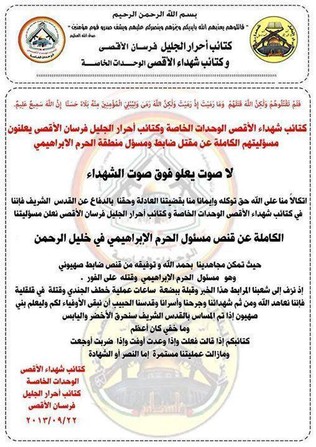 They said that their fighters managed shoot and kill an Israeli soldier, using a sniper rifle, killing him instantly as he stood along with other soldiers near the Ibrahimi Mosque in Hebron.

It is worth mentioning that the Al-Aqsa Brigades, once an armed wing of the Fateh movement of president Mahmoud Abbas, was dismantled by the Palestinian Authority, and some of its members became Palestinian security officers.

The soldier was initially seriously injured when he was shot in the neck by a Palestinian sharpshooter, close to the Ibrahimi mosque in Hebron. He died of his wounds shortly afterwards.

Following the shooting, the army initiated a search campaign in Hebron, and detained hundreds of Palestinians before releasing most of them later on.

The soldier is the second to be killed in the West Bank in 48 hours, as on Friday a soldier was killed in Qalqilia, in the northern part of the West Bank.

Israeli Defense Minister, Moshe Yaalon, stated in a twitter message that the army will act “swiftly and firmly” against what he called “terrorists who try to harm Israelis”.

His statement came following a meeting with senior Israeli military and security officers in Tel Aviv.

One Palestinian was killed by Israeli army fire last week, and at least four, including three children, were injured in at least 49 invasions carried out by the army in the occupied territories.