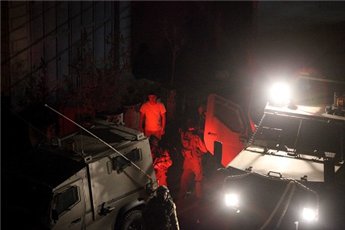 Monday at dawn, [September 23, 2013] Israeli soldiers invaded several areas in the occupied West Bank, and kidnapped at least fifteen Palestinians, after breaking into their homes and searching them. Dozens of residents injured by army fire in Hebron.Local sources in the northern West Bank city of Nablus have reported that several armored Israeli military jeeps invaded various neighborhoods in the city, searched homes, and kidnapped three residents.

The kidnapped have been identified as Assem Abdul-Razeq Fidawy, Ahmad Saber, and Fares Hisham Halawa; the army took them to an unknown destination.

Furthermore, at least seven Palestinians were kidnapped in Hebron city, in the southern part of the occupied West Bank, while more than 11 have been injured by rubber-coated metal bullets and gas bombs, during clashes with Israeli soldiers.

Soldiers also detained and interrogated hundreds of residents after breaking into their homes in Hebron. The soldiers forced the families out of their homes in several neighborhoods, close to the Ibrahimii Mosque in the city.

The invasion into Hebron comes less than a day after an Israeli soldier was shot dead by a Palestinian gunman in Hebron.

Army also installed dozens of roadblocks in Hebron city, and around it, and placed concrete blocks at the entrance of ‘Anoun village, north of Hebron.

In related news, a group of extremist Israeli settlers invaded Palestinian orchards in a number of villages in the Jenin district, in the northern part of the West Bank, and harvested them.

The Palestinian News & Info Agency (WAFA) has reported that the settlers came from three illegal settlement built on Palestinian lands that belong to residents of Jalboun village, east of Jenin. The lands are isolated behind the Israeli annexation wall.

WAFA said that the settlers invaded the lands of Mahmoud Abu Ar-Rob, and his brother Tawfiq.

Head of the Marj Eben ‘Amer village council, Khaled Abu Ar-Rob, stated that this is not the first attack of its kind, and that, last year, extremist settlers harvested his olive orchard and fled the scene.

Dozens of soldiers also invaded the Al-Yamoun village, west of Jenin, and handed a resident a military warrant ordering him to head to a nearby military base for interrogation.

Soldiers also invaded the northern and southern parts of Jenin, and the several nearby villages.

The army carried out 49 invasions into Palestinian communities, and kidnapped at least 41, including nine children.