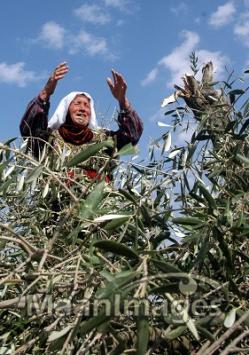 [Monday morning September 23, 2013] a group of armed extremist Israeli settlers attacked a Palestinian orchard, south of the northern West Bank city of Nablus, and uprooted its trees. “Death To Arabs” Graffiti found near Tel Aviv.Ghassan Daghlas, in charge of Israeli Settlements File at the Palestinian Authority in the northern part of the occupied West Bank, stated that the settlers illegally occupied the land before uprooting it.

He added that dozens of settlers arrived into the area, located near the Awarta-Aqraba road, close to the Itamar illegal settlement, and carried out their attack while Israeli soldiers, who arrived at the site, did not attempt to stop them.

The attack came a few hours after Israeli Prime Minister, Benjamin Netanyahu, decided to boost settlement activities in the occupied territories, and to allow the settlers into a Palestinian home in Hebron.

The settlers were removed from the home back in April of 2012 after the then-Israeli Defense Minister, Ehud Barak, issued an order in this regard following an Israeli court ruling.

Netanyahu attributed his decision to the death of the two Israeli soldiers on Sunday and Friday in the West Bank.

In related news, Israeli extremists wrote racist graffiti on a wall in Bat Yam area, in the center of the country.

The settlers wrote “Death To Arabs”, and “Revenge”, referring to the death of two Israeli soldiers killed in two separate attacks in Qalqilia and Hebron over the last 48 hours.

She claimed that the Police in Tel Aviv rushed to the scene, and is conducting an investigation into the incident.

The army carried out 49 invasions into Palestinian communities, and kidnapped at least 41, including nine children.