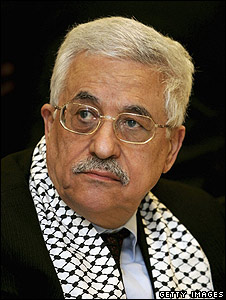 NEW YORK, September 24, 2013 (WAFA) – President Mahmoud Abbas urged leaders of the American Jewish community to support efforts to bring peace to the Middle East.He told a group of Jewish community leaders he met in New York Monday evening that this is the time to make peace.

“We have a real opportunity to achieve lasting, just, and comprehensive peace,” he said on the eve of the opening sessions of the United Nations General Assembly (UNGA). “We can do it, make no mistake.

No one gains more from reaching an agreement than Palestinians, and no one loses more if we fail to reach an agreement. Failure in not an option for us,” he said.

“We need your support to ensure the successful conclusion of the peace negotiations so that the State of Palestine can live side by side with the State of Israel in peace and security on the 1967 borders,” said Abbas.

“I urge the Israeli government to focus on building peace, and not building settlements,” he added.

Abbas warned that the current Palestinian-Israeli negotiations might be the last opportunity for peace in the region through the two-state solution.

“It is time to achieve peace in the holy land; it is time for Jews, Christians and Muslims to show the similarities of the greatness of these three faiths. It is time to replace hatred, conflict, bloodshed and incitement with cooperation, building together and realizing the potential of Israelis and Palestinians in times of peace,” he said.

“I am, 78 years old with 8 grandchildren, in pursuing peace, in trying to reach a historical agreement with Israel that will end the conflict and claims, I am not doing Israel a favor, I am doing it as a cardinal interest for my people. I hope and pray that Israeli leaders will act in the same manner,” he added.

Abbas said that he speaks the same language everywhere in the world, urging the Jewish community leaders to listen to his speech at the UNGA in which he will reiterate the Palestinian position of an independent state on the 1967 borders with East Jerusalem as its capital along with resolving all final status issues.

He stressed that East Jerusalem is an occupied territory and part of the Palestinian territory as well as the eternal capital of the future Palestinian state.
He criticized Israeli settlement activities, saying that all settlements Israel has build on occupied Palestinian land are illegal.

Abbas briefed the delegation on the latest developments in the peace talks with Israel, stressing that the United State, which exerted all efforts to re-launch the negotiations, “is a full partner in these negotiations,” which are supposed to address all permanent status issues including Jerusalem, borders, settlements, refugees, security and prisoners.

He said that a time period of 6 to 9 months was designated to achieve a comprehensive agreement including end of claims and end of conflict.

In exchange of Israel’s commitment to release the 104 prisoners held since before 1993, said Abbas, “I committed not to make accession to any of the UN agencies, and conventions, during the 6 to 9 months period.”

“We also agreed to continue fulfilling our security obligations, and we will shoulder all commitments emanating from agreements signed, the Road Map and the Arab Peace Initiative of 2002,” he added.

On incitement, said Abbas, “I propose to revive the trilateral committee on anti-incitement composed of the US, Palestinians and Israelis.”

Abbas said if Israel withdraws from the territories it occupied in 1967, at least 57 Arab and Islamic nations will normalize relations with it.

He also said that internal reconciliation would happen when Hamas agrees to presidential and legislative elections.

“Reconciliation will not be a burden on negotiations,” said Abbas, who stressed that “meanwhile we will continue with our institution building for the State of Palestine. I reiterate to you that the State of Palestine will be an example of democracy, human rights, women rights, accountability, transparency and the role of law.”

Referring to the changes in the Arab world, Abbas said that while democracy and peace are essential, the Palestinians have adopted a policy of non-interference in internal Arab affairs.