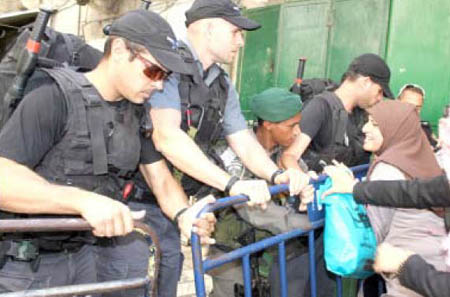 In its Weekly Report On Israeli Human Rights Violations in the Occupied Palestinian Territories for the week of 19- 25 September 2013, the Palestinian Center for Human Rights (PCHR) found that during the reporting period, Israeli forces wounded 14 civilians, including 4 children and 2 photojournalists.
2 Palestinian civilians were wounded in the east of Jabalia in the north of the Gaza Strip. In addition, a Palestinian child was wounded in the centre of Hebron, and 11 civilians were wounded during weekly non-violent protests.

On 22 September 2013, a Palestinian boy was wounded in Hebron when some boys gathered and threw stones at Israeli soldiers stationed at the entrance of al-Shuhada’ Street, south of the Old Town of Hebron. The Israeli soldiers fired sound bombs, tear gas canisters and rubber-coated metal bullets in response. As a result, a 16-year-old civilian was wounded by a rubber-coated metal bullet in the right thigh.

Following the killing of an Israeli soldier on 22 September 2013, Israeli forces carried out a series of collective punishment measures against Palestinian civilians in the city. They deployed between houses in the centre of the Old Town and declared the area a closed military zone. They raided many houses in different neighbourhoods, including Abu Snaina, Jabal Jawhar, Qatyoun, Jaber neighbourhood, Tal’at Abu Hadeed, al-Karantina, the vicinity of the Ibrahimi mosque and the vicinity of Tareq Ben Ziad School. Israeli forces also searched the houses, and damaged their contents. They kept their occupants in a room and took others to the vicinity of the above-mentioned school. In the meantime, Israeli forces stationed atop of a number of houses and turned them into military sites. Moreover, they informed occupants of those houses of the decision to seize the houses for military reasons. Israeli forces closed all entrances leading to Hebron and erected checkpoints. They also completely closed the entrance of al-Harayeq road linking Hebron with its southern villages. Israeli forces detained dozens of Palestinian civilians around Tareq Ben Ziad School and released them later, excluding 7 ones who remained in custody.

In the Gaza Strip, on Friday, 20 September 2013, 2 Palestinian boys were wounded when Israeli forces stationed along the border fence to the east of al-Shuhada’ cemetery, east of Jabalia, opened fire at a group of young men, who were about 100 meters away from the fence.

In the Gaza Strip, on 24 September 2013, Israeli forces carried out 2 limited incursions. They moved about 200 meters into the east of al-Qarara village, east of Khan Yunis, in the southern Gaza Strip. Moreover, Israeli forces moved about 200 meters into the west of the border fence, east of al-Salqa valley, east of Deir al-Balah. In both incursions, they levelled lands along the border fence and withdrew later.

Settlers moved into many areas and performed their Talmudic rituals. 2 researchers from B’Tselem were attacked and their cameras were damaged in Hebron. Settlers seized a house in the Old Town of Hebron.

On 20 September 2013, under the protection of Israeli forces, about 300 settlers from ‘Efrat’ settlement in al-Khader village, south of Bethlehem, moved into Suleiman Pools area between Artas and al-Khader villages. They performed their Talmudic rituals around the pools celebrating the Jewish holiday of ‘Sukkot’.

On 21 September 2013, under the protection of Israeli forces, a group of settlers moved into Silet al-Daher village, south of Jenin, where ‘Homesh’ settlement used to stand. Local sources stated to a PCHR fieldworker that dozens of settlers arrived at the area by buses with the company of Israeli forces. They performed Talmudic rituals and established tents. They withdrew later and no further incidents were reported. The settlers did the same approximately 13:00 on Sunday, 22 September 2013, as well.

On the same day, settlers from ‘Havat Gilad’ settlement in Jeet village, northeast of Qalqilia, moved into lands called al-Jorfah around the aforementioned settlement, north of the village. They damaged and destroyed about 30 fruitful olive trees and burnt a digger used to dig wells. They also stole the iron head of the digger.

On the same day, a number of settlers coming from ‘Kiryat Arba’ settlement, east of Hebron, seized a house belonging to al-Rajabi family in Wadi al-Husein area. Israeli settlers stationed in the building prevented them from entry. In the meantime, other settlers walked in the streets of al-Ja’bari neighbourhood and chanted racist slogans against Arabs.

On 23 September 2013, a number of settlers gathered in front of ‘Gosh Etzion’ settlement complex, south of Bethlehem, and chanted slogans for revenge against Arabs.

On the same day, settlers from ‘Ma’ale Gilboa’, ‘Joshua King’ and ‘Merav’ settlements that are established on lands of Jalaboun village, northeast of Jenin, stole the olives belonging to residents of Jalaboun village. On the following day (Tuesday, 24 September 2013) a number of settlers from the above-mentioned settlements were present on Palestinian farmlands and damaged a number of trees.

On Monday also, a number of settlers from settlements outposts in the Old Town of Hebron attacked Palestinian houses with stones and empty bottles in Qatyoun, Tal al-Rumaida, Jaber and Wad al-Hussein neighbourhoods while Israeli forces were watching.

On the same day, a group of settlers from ‘Ramat Yishai’ that is established on lands of Tal al-Rumaida neighbourhood, south of Hebron, attacked the family of Emad Awni Abu Shamsiya (40) and 2 researchers from B’Tselem: Mousa Mahmoud Abu Hashash and Manal No’man al-Ja’bari. Israeli forces damaged cameras of the researchers while they were filming settler attacks on a group of international activists.

On the same day, a group of settlers raided a house belonging to the family of Ali Abu Rajab in the vicinity of the Ibrahimi mosque, in the centre of the Old Town of Hebron. They raised the Israeli flag in front of Israeli soldiers and prevented the house’s owner and his 7-member family from moving inside. At approximately 02:00 on Tuesday, 23 September 2013, Israeli forces obliged the settlers to leave the house. As a result, the settlers established a tent in front of the house and raised the Israeli flag. Moreover, they fixed posters at the entrance of the house and fences of parks around the Ibrahimi Mosque and al-Fayha’ School on the settlers’ right to possess the house. In addition, they performed religious rituals there, while Israeli forces prevented the Palestinian family from leaving the house.

On 24 September 2013, dozens of settlers from ‘Adora’ settlement, west of Hebron, organized a march marking the Jewish holiday of ‘Yom Kippur’. They made their way towards al-Nabi Saleh area, west of Ethna, and Ein Fer’a near Tafouh village, west of Hebron.

On the same day, dozens of settlers from settlements built on lands east of Yatta organized a march marking the Jewish holiday of ‘Yom Kippur’. They made their way around villages threatened to be confiscated in the southeast of Yatta, in al-Musafer area. They also went to al-Karmel, al-Baraka and Kherbet Sousia, where they performed their rituals and chanted slogans against Arabs.

Also on the same day, under the protection of Israeli forces, a group of settlers moved into al-Hafira area between ‘Arraba and Marka villages, southwest of Jenin. They performed religious rituals near and archaeological site and stayed there for some time, after which they withdrew.

During the reporting period, Israeli forces continued the systematic use of excessive force against peaceful protests organised by Palestinian, Israeli and international activists against the construction of the annexation wall and settlement activities in the West Bank. As a result, 11 civilians were wounded during 2 peaceful protests in Bil’in village, northwest of Ramallah, and Kofur Qaddoum village, northeast of Qalqilia. Furthermore, dozens suffered tear gas inhalation and other sustained bruises. 6 civilians were wounded in Kofur Qaddoum protest and the 5 others were wounded in Bil’in protest.

(PCHR keeps the names of the wounded Palestinians).

Also, following the Friday Prayer, dozens of Palestinian civilians and international and Israeli human rights defenders organised a peaceful demonstration in Ni’lin village, west of Ramallah, in protest at the construction of the annexation wall and settlement activities. The demonstrators made their way towards the annexation wall. Israeli forces closed the wall gate with barbwire and, when the demonstrators attempted to access the lands behind the barbwire, they were stopped by Israeli soldiers. The demonstrators threw stones at the Israeli soldiers who responded with live ammunition, rubber-coated metal bullets, sound bombs, and tear gas canisters, and chased them across olive fields as far as the outskirts of the village. As a result, dozens of demonstrators suffered tear gas inhalation and others sustained bruises.

Around the same time on Friday, dozens of Palestinian civilians, Israeli and international human rights activists gathered at the Martyrs Square in al-Nabi Saleh village, northwest of Ramallah, to hold a weekly peaceful protest against the construction of the annexation wall and settlement activities. The protesters walked towards Palestinian lands that Israeli settlers from the nearby ‘Halmish’ settlement are trying to seize. From the morning, Israeli forces had closed all entrances to the village to prevent Palestinians, international activists, and journalists from joining the demonstration. Upon their arrival in the area, Israeli soldiers fired live ammunition, rubber-coated bullets, sound bombs, and tear gas canisters, chased the demonstrators into the village and sprayed them and civilian houses with waste water. As a result, dozens of Palestinians suffered tear gas inhalation and others sustained bruises.

Also following the Friday prayer, dozens of Palestinian civilians, international activists and popular resistance activists gathered in al-Ma’sara village, south of Bethlehem, to hold a weekly peaceful protest called ‘The 31st anniversary of Sabra and Shatila massacre’ against the construction of the annexation wall and settlement activities. The protestors made their way from al-Shomo’ Cultural Centre, in the centre of the village raising the Palestinian flag. Upon their arrival near the annexation wall, Israeli soldiers fired sound bombs and tear gas canisters to disperse them. As a result, dozens of protestors suffered tear gas inhalation. However, no casualties were reported.

Due to the number and severity of Israeli human rights violations this week, the PCHR made several recommendations to the international community. Among these were a recommendation that the international community and the United Nations use all available means to allow the Palestinian people to enjoy their right to self-determination, through the establishment of the Palestinian State, which was recognized by the UN General Assembly with a vast majority, using all international legal mechanisms, including sanctions to end the occupation of the State of Palestine;