Abbas At UN: “It Is Time For Peace” 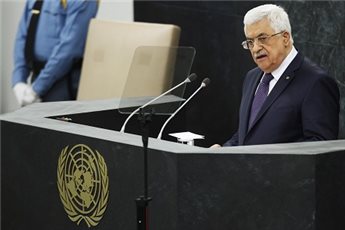 In his first speech as the President of Palestine at the United Nations General Assembly, President Mahmoud Abbas said that the time for peace has come, and that the International community must pressure Israel to end its violations, and illegal settlement activities.Abbas said that the State of Palestine will practice its role, amongst other nations, in a positive manner that serves peace and stability in the region.

He stated that filing applications at the United Nations aims at achieving international recognition of the legitimate Palestinian rights, and that all diplomatic moves are not aimed, in any way, at delegitimizing Israel.

“We are holding negotiations with Israel, we have clear and truthful intensions; we committed to successful peace talks”, President Abbas added, “We are faithful to our commitments, peace means lifting this historic injustice inflicted on the Palestinian people since the Nakba of 1948”.

He said that peace talks aim at reaching an agreement that leads to the establishment of an independent Palestinian state, and added that the Palestinians will not accept interim agreements.

“We want to reach a permanent and comprehensive peace deal with Israel”, Abbas elaborated, “A State in all Palestinian territories captured by Israel in 1967, with East Jerusalem as its capital, we are committed to fulfilling our obligations to achieve peace within 9 months”.

The President further stated that the International Community must act on stopping any actions that jeopardize peace talks, and must end all Israeli violations against holy sites.

“Occupation, settlements and walls do not achieve security, and cannot achieve a lasting peace in the region”, Abbas said, “Let us build bridges of peace, instead of walls; let’s build a just and comprehensive peace, peace based on logic, justice and human rights”.

Abbas added that Palestine does not interfere into internal affairs of Arab states, and supports all nonviolent activities, and the peaceful, legitimate, choices of nations.

“There is no mission that is more noble than the mission of”, he said, “Our mission is to achieve peace in the holy land, to fulfill the message of all religions”.