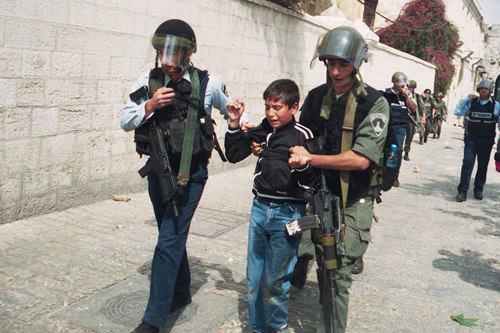 Israeli soldiers kidnapped on Thursday at dawn [September 26 2013] five Palestinians in different parts of the southern West Bank district of Hebron, after the soldiers broke into and searched dozens of homes.Media sources in Hebron said that dozens of soldiers invaded Deir Samet town, southwest of Hebron, and kidnapped one Palestinian identified as Omar Ahmad Sharha, 34.

His brother, Hazem, said that a large number of soldiers broke into the family home, approximately at 2:30 A.M, after using explosives to detonate its main door. He added that the soldiers then violently searched the property causing excessive damage.

Soldiers also forced the family into one room, and took away their phones and ID cards for several hours.

Furthermore, soldiers kidnapped Mo’taz Mohammad Al-Karaky, 20, in the center of homes, and kidnapped Mohammad Abu Rayyan at a roadblock near the Halhoul Bridge area, north of Hebron.

On Wednesday evening, soldiers detained four Palestinian children in the Al-Khader town, south of Bethlehem, and violently beat them before handing them back to the Palestinians.