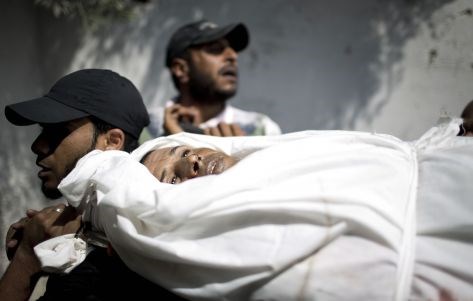 After three long days of search, the body of slain fighter, Khaled Abu Bakra, was located, on Saturday evening under the rubble of tunnel bombarded by the Israeli army on the border near Khan Younis, in the southern part of the Gaza Strip.Spokesperson of the Ministry of Health in the Gaza Strip Ashraf Al-Qodra stated that various governmental and civil institutions, residents and the Red Cross participated in the search until locating the body of the fighter.

The severely mutilated body of Abu Bakra was moved to the Nasser Governmental Hospital.

Al-Qodra added that the search campaign faced numerous obstacles, mainly due to toxic shells fired by the army at the tunnels.

He said the search had to be stopped as Israel allowed rescue teams to search for a limited time, and that the bodies of Mohammad Daoud and Mohammad Al-Qassas, are still buried under the rubble of the tunnels that is 18-20 meters deep underground.

Medical sources in Gaza said that the search would resume in an attempt to locate the two bodies.

Three days ago, Israeli military vehicles and tanks invaded the border area east of Khan Younis, to destroy the tunnel, that was uncovered a month ago, killed the three fighters, including two field leaders of the A-Qassam Brigades of Hamas.

As several armored vehicles and dozens of soldiers invaded the border area, on Thursday at night, to destroy the tunnel, armed resistance in Gaza opened fire at the invading soldiers and fired several mortars, wounding five Israeli soldiers, one seriously.

Israel said that the tunnel its soldiers discover is 2.5 kilometers (1.5 Miles) in length extending along the Gaza border after fighters of the Al-Qassam Brigades of Hamas, dug it through the sandy soil of the area and strengthened it with concrete.

The tunnel extended all the way reaching a military base, close to the Ein Hashlosha Kibbutz, across the border, meant to be used in carrying out attacks and to attempt the abduction of Israeli soldiers to trade them with Palestinian political prisoners held by Israel.

Israel said that explosives were located and defused in the tunnel, and that the digging of the tunnel with this magnitude would have needed at least a month to dig.