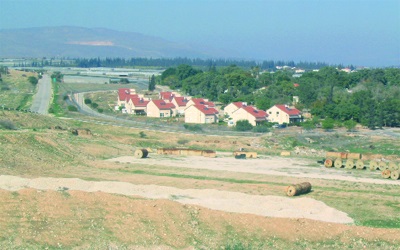 Israeli Prime Minister Benjamin Netanyahu decided to build a wall in the Jordan Valley, on the border between the occupied West Bank and Jordan. The decision was met with rejection and condemnation from the Palestinian Authority in the West Bank.According to Israeli sources, Netanyahu wants to build the Wall to prevent Syrian refugees from entering the occupied West bank through its border area with Jordan.

Netanyahu also wants to ensure a continued construction and expansion of illegal settlements in the Jordan Valley area, and said that Israel does not intend to withdraw from the area under any agreement with the Palestinians.

Nabil Abu Rodeina Spokesperson of Palestinian President Mahmoud Abbas stated that the statements and decisions of Netanyahu to build this illegal wall in the Jordan Valley are meant to foil the chances of success of the upcoming visit of U.S. Secretary of State John Kerry, and the political process.

“Settlements are illegal, illegitimate and the Wall will fall”, Abu Rodeina said, “Without an independent state, without Jerusalem as the capital, there will be no peace or stability in the region”.

He further stated that borders are one of the core issues that have not been resolved, and determining those borders only takes place in peace talks, not through illegitimate unilateral decisions.

Israel claims it wants direct talks without preconditions, and that it is interested in peace with the Palestinians but refuses to recognize the legitimate Palestinian rights of statehood, sovereignty and independence.

Tel Aviv wants to maintain control over borders, natural resources, and all sensitive areas in the occupied West Bank, including occupied Jerusalem.

Villages in different parts of the West Bank lost large areas of their lands due to the illegal Annexation Wall and Israel’s illegal settlement construction and expansion activities that left the Palestinian communities devastated and isolated from what is left of their lands.

Jericho, Nablus and Tubas are amongst the most impacted areas by Israel’s illegal policies and settlement activities.

Rich in water resources but suffer a sharp shortage of water as Israel controls all water resources, and grants them to its illegal settlements and military bases.