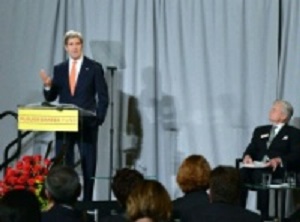 U.S. Secretary of State, John Kerry, started a Middle East Tour in which he plans to visit a number of countries, including Tel Aviv, the Palestinian territories.Kerry will be holding an official visit to Egypt, for the first time since the Egyptian military ousted the elected President, Mohammad Morsi, who was elected on June 30 2012, and removed on July 3 2013.

His visit also comes one day before the beginning of the trial of Morsi at an Egyptian court in Cairo.

The U.S official also plans to visit Saudi Arabia to hold a meeting with Prince Saud Al-Fasial, the Foreign Minister of Saudi Arabia.

Saudi sources said that Kerry intends to discuss bilateral relations between the two countries, and U.S. policies in the region, especially regarding the Syrian and Iranian files.

He also intends to visit Tel Aviv and Ramallah to hold separate talks regarding the political process, and the obstacles it faces.

Palestinian sources said that Kerry would be meeting Palestinian President, Mahmoud Abbas, in the West Bank city of Bethlehem.

The sources added that, besides talks on the political process, Abbas intends to ask Kerry to call on Tel Aviv to stop all of its settlement activities to give peace talks a chance to survive, especially following Israel’s recent decision to build thousands of units for Jewish settlers in the occupied territories, including occupied Jerusalem.

He said that the decision is a move meant to preclude any positive outcome that could rise from Kerry’s visit to the region.

The official added that Israel’s settlements and its wall are illegal, and will be removed, and that the Middle East, and the region, will not see peace and stability without the establishment of a contiguous, viable and independent Palestinian State.

“The Wall and settlements are illegitimate; Israel is fully responsible for failure in peace talks”, Abu Rodeina said, “The U.S administration must send a clear message to Netanyahu to stop all violations”.