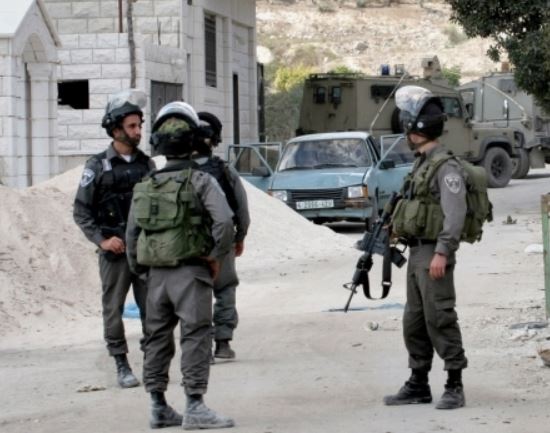 [Sunday Morning November 3, 2013] Dozens of Israeli soldiers invaded various districts in the occupied West Bank, broke into homes, kidnapped Palestinians, and installed several roadblocks before stopping and interrogating dozens of residents.Local sources have reported that several Israeli military vehicles invaded the eastern area of Nablus city, and were deployed around Balata and Askar refugee camps, east of the city, and the Amman Street.

The sources added that the invasion did not lead to clashes with local residents despite provocations from the military.

Furthermore, soldiers kidnapped one Palestinian identified as Saleh Younis Saleh, 19 years of age, at the Bissan roadblock, near the West Bank city of Jericho.
Saleh is from Yatta town, south of the southern West Bank city of Hebron. He was taken to the Huwwara military camp, near Nablus.

In The Hebron District, one Palestinian youth, identified as Mohammad Zqqout Al-Badawi, from the Al-Arroub refugee camp, was moved to a local hospital in the city after a number of soldiers assaulted him.

The Palestinian Prisoners Society (PPS) has reported that the soldiers broke into the home of Khader Al-Froukh, and kidnapped his son Morad, 19 years of age.

The army claimed that the seven are bearers of Palestinian ID cards, and that they did not obtain work and entry permits.

Eyewitnesses said that the soldiers broke into a home in the neighborhood, and kidnapped the seven before taking them to unknown destinations.

Also on Saturday evening, scores of soldiers invaded Osareen village, and Aqraba town, near Nablus, leading to clashes with dozens of local youths.

Eyewitnesses said that several soldiers surrounded Palestinians who gathered in Khirbit Taweel village, south of Nablus, and attacked them as they attempted to rebuild structures demolished by the military.