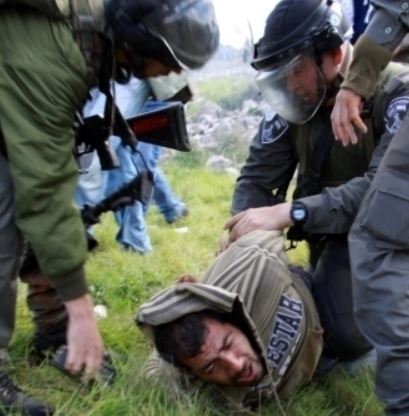 Saturday evening [November 2, 2013] Israeli soldiers kidnapped two Palestinian farmers after a number of extremist Israeli settlers attacked them, south of Hebron, in the southern part of the occupied West Bank.Coordinator of the Popular Committee against the Wall and Settlements Rateb Jabour stated that the soldiers kidnapped Sa’id Mohammad Awad, 42, and Jamil Ahmad Awad, 48, and took them to an unknown destination.

Jabour added that the soldiers kidnapped the two after a number of extremist Israeli settlers of Mitzpe Yair illegal settlement attacked several farmers and shepherds in the area.
He said that more than 20 Israeli settlers violently attacked children, farmers and shepherds in Khirbit Qweiwees Bedouin village, east of Yatta town, while Israeli soldiers did not attempt to remove the settlers.

Jabour further stated that an Israeli court recently ruled in favor of returning Palestinian lands in the area to their owners, but the soldiers failed to implement the ruling, and failed to remove sheds installed by the settlers.