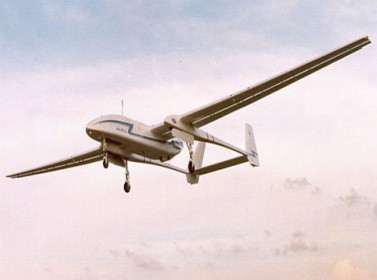 Palestinian fighters in the Gaza Strip declared, Sunday November 3, 2013, that it managed to down an Israeli drone flying over the northern part of the Gaza Strip.The fighters managed to control the drone and downed it in an open area in northern Gaza, while Israeli sources admitted that the drone did not drop due to a technical error.

The Al-Qassam Brigades, the armed wing of Hamas, said its fighters managed to down the drone.

An Israeli military spokesperson stated Sunday that the drone fell inside the Gaza Strip, effectively falling in the hands of the resistance.

He said that the drone landed and crashed due to a “malfunction”, an issue that the resistance challenged.

In related news, Israeli sources said that Israeli Defense Minister, Moshe Yaalon, and a number of senior military leaders, survived a possible attack by Palestinian fighters as the official toured in the border tunnel that was uncovered by the army a month ago, leading to a settlement across the border.

The sources said that, despite the fact that the army said it defused the explosives in the tunnel, a bomb was still active, but did not explode.

Yaalon and the army commanders visited the tunnel on October 29, and two days later, the bomb exploded as soldiers of the corps of engineers were inspecting the tunnel, leading to five injuries.

Israel said that the bomb was in the runnel visited by Yaalon, and that it could have exploded at any given moment, but it exploded the next day, and that the army started a classified investigation into the issue.