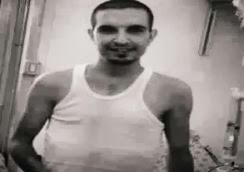 [Monday Evening November 4, 2013] Palestinian medical sources have reported that Rami Bajes Az-Zilbany, 27 years of age, died of wounds suffered four years ago during clashes between Palestinian youths and Israeli soldiers invading the Al-Aqsa Mosque.Zilbany, from the Shu’fat refugee camp in occupied East Jerusalem, was shot by a rubber-coated metal bullet to the heart causing hemorrhaging leading to heart valve malfunction, and went through four surgeries.

He spent his last few years between hospitals due to ongoing complications.

His burial ceremony would be held Tuesday at the Al-Aqsa Mosque following noon prayers, before his burial at the Bab Ar-Rahma graveyard in occupied Jerusalem.

It is worth mentioning that Zilbany’s father, Bajes, was killed after being rammed by a settler’s vehicle in occupied Jerusalem.