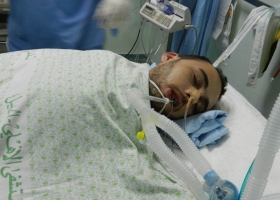 The Palestinian Centre for Human Rights (PCHR) calls for an immediate and independent investigation into the circumstances of the death of a Palestinian prisoner, Hassan al-Turabi, in Affoula Hospital inside Israel on Tuesday, 05 November 2013.PCHR is deeply concerned that the Israeli authorities may have delayed offering Abu Hamdiya timely and adequate medical treatment for his condition.

Hassan ‘Abdul Halim ‘Abdul Qader al-Turabi, 23, from Surra village near Nablus, died on Tuesday morning, 05 November 2013, in Affoula Hospital inside Israel where he was receiving medical treatment for leukaemia.

Israeli forces arrested al-Turabi from his house in Surra village on 07 January 2013 although they knew that he was suffering from leukaemia.

The Israeli military prosecutor accused al-Turabi of being a member of Islamic Jihad and joining and one of its armed cells.

His health condition deteriorated 3 weeks ago in Mageddo Prison inside Israel as a result of a burst of blood vessels and severe blood vomiting, so he was evacuated to ‘Affoula Hospital.

He was admitted into the intensive care unit, where it was found that he was suffering from 3 clots in the neck, the chest and the abdomen. Two days later, Israeli forces cancelled the order of his detention, but he was kept in the hospital because his condition was critical.

Al-Turabi’s death highlights the deterioration of detention conditions of Palestinian prisoners in Israeli jails, including repressive measures against them, medical negligence they are subject to and the failure to provide necessary medical treatment to hundreds of patients, especially those who suffer from serious diseases.

With al-Turabi’s death, the number of Palestinian prisoners who died in Israeli jails in 2013 has risen to 3. On 02 April 2013, Maisara Abu Hamdiya, 64, from Hebron, died in Soroka Military Hospital in Israel, where he was receiving medical treatment for throat cancer; and on 23 February 2013, Arafat Jaradat, 30, from Hebron, died as a result of torture methods he was subjected to during interrogation in Mageddo Prison inside Israel.
PCHR holds Israeli authorities fully responsible for al-Turabi’s death, and:

1. Calls for an immediate and independent investigation into al-Turabi’s death;

2. Calls upon the international community to compel Israel to respect international law and humanitarian law, in particular the Fourth Geneva Convention and the UN Standard Minimum Rules for the Treatment of Prisoners; and

3. Expresses concern regarding the deterioration of health conditions of hundreds of Palestinians who are currently detained in Israeli prisons and detention centres due to medical negligence, and calls for immediately transferring prisoners who suffer from serious diseased to hospital in order to receive adequate medical treatment.