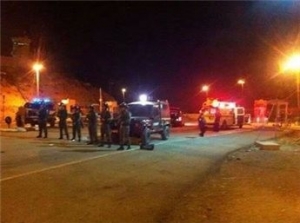 The Israeli military alleged that al-Atrash “attempted to stab a soldier at the roadblock” before soldiers noticed him and shot him dead.

The army withheld his body, and moved it an israeli forensic facility, and handed it to Palestinian Red Crescent ambulance on Friday at dawn.

On Thursday evening, soldiers stationed at the Za’tara roadblock, south of the northern West Bank city of Nablus, shot and killed a Palestinian, after alleging he tried to attack soldiers in the area using a fireworks gun.

Eyewitnesses said that the body of the Palestinian, Bashir Same Hananeen, 28, from Marka village near the northern West Bank city of Jenin, was seen lying next to the roadblock.

Soldiers prevented the Palestinians from approaching, and closed the roadblock, forcing the residents to seek alternate routes.

His family strongly denounced his death, and said that the Israeli claims he carried the fireworks gun are just lies and manipulation of the truth, adding that Hananeen is a college teacher, ‘executed in cold blood.’

Earlier on Thursday, soldiers invaded various districts in the occupied West Bank, and kidnapped at least seven Palestinians before taking them to a number of interrogation facilities.

Later in the day, Israeli officers kidnapped Mohammad Abu Khdeir, at the Ben Gurion Airport in Tel Aviv as he was flying back from Egypt.

An Israeli court ordered him under interrogation until November 13, and prevented him from seeing his lawyer. His family said he works for the Jerusalem daily newspaper and that the soldiers broke into their home and violently searched it.