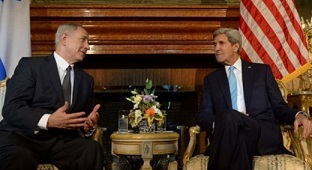 U.S. Secretary of State John Kerry stated that Israel needs to withdraw from the Jordan valley and from Jordanian-Palestinian borders, adding that should the situation remain as it is, a third Palestinian Intifada will take place.“The alternative to peace talks is chaos”, he said, “Does Israel wish for a third Intifada? Should we fail to achieve peace, Israel will face further isolation”.

Kerry stated that should direct talks fail, and a new Palestinian Intifada takes place, Israel’s isolation around the world would increase, and “more groups will be trying to delegitimize it”.

He added that Israel and the Palestinians need to thoroughly discuss the future of Israel’s settlements in all territories captured during the June 1967 war.

The Palestinian leadership in the West Bank recently threatened to quit direct talks with Tel Aviv due to its ongoing violations, including ongoing invasions that recently led to dozens casualties, and its ongoing illegal settlement construction and expansion activities.

The U.S. official urged Israel and the Palestinians to overcome the obstacles peace talks are facing, and to seriously work on achieving a peace agreement by the end of April 2014.

Israel Ynetnews has reported that Defense Minister Moshe Ya’alon said that “threats of a third Intifada should not scare anybody” and that it is likely that “direct talks do not have an immediate solution, but a long one.”

Yet, Kerry demanded the Palestinians to recognize Israel as a Jewish State, a demand set forth by Netanyahu and his extremist coalition partners.

Earlier on Thursday, Kerry held a meeting with King Abdullah of Jordan, and informed him that direct talks managed to create what he called “some clarity on certain issues”.

Jordan said peace in the Middle East is a high priority issue, especially the issue of Palestinian refugees, including those living in the kingdom, the future of Jerusalem, and Islamic and Christian holy sites.

Israel refuses to withdraw from the Jordan Valley, from occupied East Jerusalem, and from various important parts of the occupied West Bank, and insists on continuing the construction and expansion of its illegal settlements in direct violation of International Law.