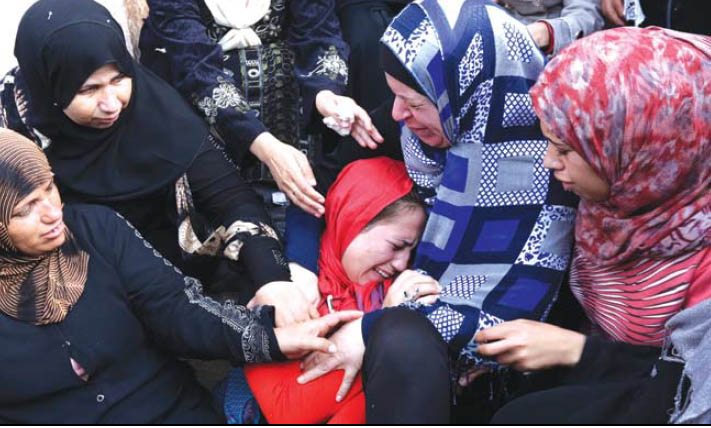 The Palestinian Center for Human Rights (PCHR) based in Gaza published its weekly report on Israeli violations in the occupied territories, in the period between October 21 and November 6 2013, and said that Israel army killed five Palestinians, and injured dozens of residents.It stated that, on October 31, soldiers killed four members of the Al-Qassam Brigades, the armed wing of the Hamas movement, during clashes that took place as the army invaded Palestinian areas between Al-Qarara and Bani Suhaila village, east of Khan Younis, in the southern part of the Gaza Strip.

Three of the slain fighters were in a tunnel that was bombarded by the invading soldiers, and their bodies were buried under the rubble.

Also on October 31, soldiers shot and killed a Palestinian civilian in Qabatia village, near the northern West Bank city of Jenin.

The army kidnapped him on January 7 2013 despite the fact he suffered from leukemia.

He was held at the Al-Affoula hospital after being moved from Majeddo Prison following a sharp deterioration due to the seriousness of his condition, resulting from the lack of adequate and specialized medical treatment.

The PCHR said that the army conducted at least 50 invasions into Palestinian communities in the West Bank, and kidnapped 50 Palestinians, including seven children.

Among the detainees were some political leaders of the Hamas movement. Several Palestinians were also kidnapped on roadblocks across the West Bank.

It added that Israeli Navy boats continued to target Palestinian fishermen in Palestinian territorial waters in the Gaza Strip.

Furthermore, extremist Israeli settlers carried out dozens of attacks against Palestinian villagers and their lands in different parts of the West Bank, cut and uprooted more than 340 trees in Palestinian orchards.

Also, at least six Palestinians have been injured as the army continued to use excessive force against nonviolent activists, including Israeli and International activists, protesting Israel’s illegal Annexation Wall and its illegal settlements.

Ongoing Airstrikes On Gaza At Dawn