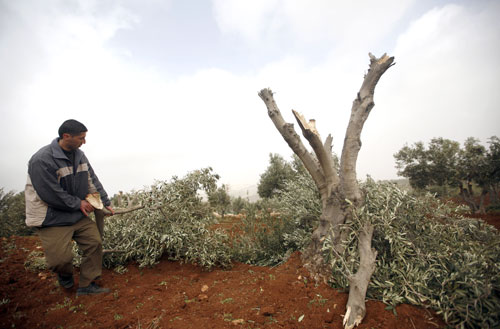 [Thursday November 14, 2013] Israeli soldiers invaded Yabod village, near the northern West Bank city of Jenin, and cut more than 100 olive trees that belong to the residents despite a pending petition filed by the owners with the Israeli Supreme Court.Head of the Yabod Village Council Samer Abu Baker told the Palestinian News & Info Agency (WAFA) that the cut trees are along the Jenin-Tulkarem road, near the illegal Israeli settlement of Mabo Dotan.

He added that the attack took place during late night hours, on Wednesday at night, and again earlier on Thursday morning.

“Just like thieves, they arrived quickly and cut the trees”, Abu Baker said, “They wanted to commit their crimes before their Supreme Court even renders its decision”.

The Israeli Military “justified” it assault by citing “security considerations”, similar to its first attack against the orchards in the area in 2002, WAFA added.