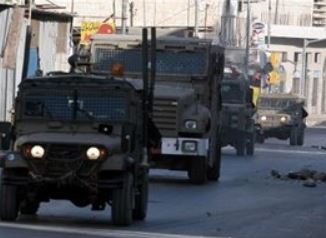 Another resident, identified as Ali Al-Bakry was kidnapped from his home in Hebron city.

Furthermore, soldiers invaded Be’er Al-Basha village, south of the northern West Bank city of Jenin, and kidnapped Mo’tasem Jaradat, 22, and his brother Arafat, 23, in addition to Tawfiq Sharif Ghawadra, 19. The army alleges their brother stabbed and killed an Israeli soldier in Al-Affoula on Wednesday.

In addition, dozens of soldiers invaded Ya’bod town, near Jenin, and violently broke into and searched two homes after forcing the families out. Clashes took place between the invading soldiers and local youths.

Soldiers fired rounds of live ammunition and concussion grenades at local youths who hurled stones and empty bottles at them; no injuries have been reported.

Local sources have reported that dozens of soldiers invaded Ath-Thaheriyya town, south of Hebron, broke into and searched dozens of homes, and kidnapped 10 Palestinians including four brothers.

In related news, soldiers invaded the Be’er A-Basha village, south of the northern West Bank city of Jenin, and kidnapped Mo’tasem Sharif Ghawadra, the brother of a Palestinian who stabbed an Israeli soldier in Al-‘Affoula.

The father, Sharif, said that dozens of soldiers violently broke into the home at midnight and hurled a sound grenade in the house.

He added that the soldiers violently searched the property, and assaulted his family, adding that serious damage to windows, doors and closets resulted from the Israeli military attack.

Sharif further stated that soldiers violently assaulted him, his wife and his son, Tawfiq, and kidnapped Jamil Mohammad Ghawadra, 16 years of age, who was staying over.

The Israeli army claimed that the arrests are connected to the death of an Israeli soldier who was stabbed on Wednesday in Al-‘Affoula, and said that the kidnapped wrote graffiti containing the name of the soldier in the village.