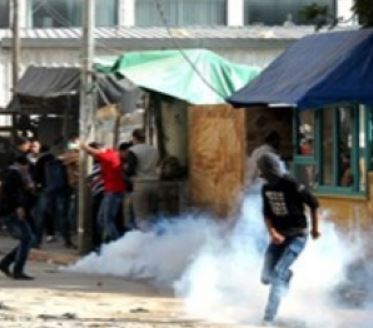 [Friday November 15, 2013] Several residents have been injured during clashes with invading Israeli soldiers in Hebron, located in the southern part of the occupied West Bank, Palestinian medical sources report.The sources said that several residents were shot with rubber-coated metal bullets, while others suffered the effects of tear gas inhalation in the center of Hebron, and in the Al-Arroub and Al-Fawwar refugee camps.

Local sources report that a number of soldiers tried to invade the Al-Arab refugee camp, clashing with dozens of youth who met them, there, with stones and empty bottles.

Medical sources say that members of the Abu Daoud family were moved to the Hebron Governmental Hospital, from the camp, after suffering the effects of tear gas inhalation while in their own home.

The army also targeted a number of Hebron homes, in addition, and in the Al-Fawwar refugee camp, firing gas bombs and concussion grenades at them.