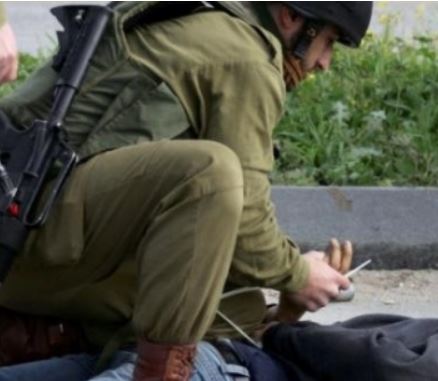 The kidnapped have been identified as ‘Ala Bassam Abed Yahia, 20, Karem Amin Hammad, 18, Naseem Mahmoud Waked, 25, Hasan Hakam Yahia, 20.
The orchards where the attack took place are close to the Shakid settlement, built on privately owned Palestinian property.

Furthermore, three Palestinians have been injured during clashes with Israeli soldiers in the Ras Qabsa area, between Abu Dis and Al-‘Ezariyya town, in occupied East Jerusalem.

Za’rour added that the soldiers fired rounds of live ammunition, gas bombs and glass bullets, in addition to firing dozens of gas bombs.

Three young men were moved to the medical center in Al-’Ezariyya; two of them were shot with live rounds, while the third was shot by a glass bullet.

Furthermore, fire broke out in a balcony window of an adjacent home after a gas bomb was fired at it; the family managed to extinguish the fire before it spread out.

In Bethlehem, spokesperson of the Popular Committee against the Wall and Settlements in Bethlehem Mohammad Breijiyya stated that dozens of local nonviolent activists managed to remove a tent installed by extremist Israeli settlers at the western entrance of Teqoua’ village, near Bethlehem.

The Palestinians removed the tent and raised a Palestinian flag in its place. The settlers installed their tent a few days ago in an attempt to create a new illegal settlement outpost.