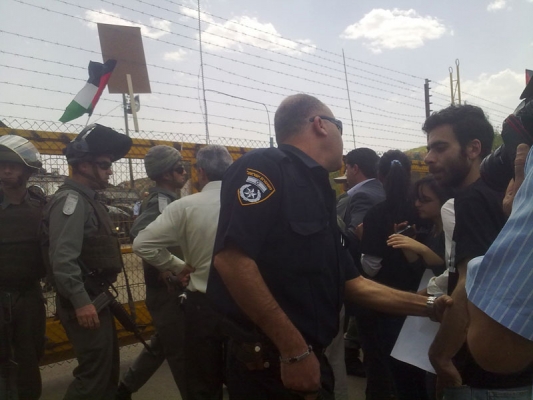 [Saturday November 16, 2013] The Palestinian Prisoners Society (PPS) has reported that the current number of Palestinians imprisoned by Israel under arbitrary Administrative Detention Orders, without charges or any due process now stands at 164.The PPS said that the 164 administrative detainees are currently held in Majeddo and Ofer prisons, and the Negev detention camp in the Negev Desert.

Five administrative detainees are from Qalqilia, four from Jenin, four from Bethlehem, four from Tubas, two from Tulkarem, one from Salfit, and one from Jericho.

Head of the PPS Qaddoura Fares said that, despite the fact that Israel is now the only country which practices this sort of illegitimate detention, Tel Aviv continues its violations and insists on keeping such orders, despite their illegality according to International Law.

Fares added that Israel should be prosecuted by international courts for its crimes against the Palestinian people and political prisoners, mainly those held without charges.

Commenting on the high number of arrests in Hebron, head of the Hebron office of the PPS, Amjad Najjar, said that Israel is ethically and legally broke, and continues to come up with fake justifications for the arrests, especially since Hebron has been a target for both Israeli soldiers and settlers.

Najjar added that the arbitrary Administrative Detention orders violate Article #4 of the International Covenant on Civil and Political Rights.

He said that, with its silence and inaction, the International Community encouraged Israel to continue using this illegal policy.

1. Everyone has the right to liberty and security of person. No one shall be subjected to arbitrary arrest or detention. No one shall be deprived of his liberty except on such grounds and in accordance with such procedure as are established by law.

2. Anyone who is arrested shall be informed, at the time of arrest, of the reasons for his arrest and shall be promptly informed of any charges against him.

3. Anyone arrested or detained on a criminal charge shall be brought promptly before a judge or other officer authorized by law to exercise judicial power and shall be entitled to trial within a reasonable time or to release.

It shall not be the general rule that persons awaiting trial shall be detained in custody, but release may be subject to guarantees to appear for trial, at any other stage of the judicial proceedings, and, should occasion arise, for execution of the judgment.

4. Anyone who is deprived of his liberty by arrest or detention shall be entitled to take proceedings before a court, in order that that court may decide without delay on the lawfulness of his detention and order his release if the detention is not lawful.

5. Anyone who has been the victim of unlawful arrest or detention shall have an enforceable right to compensation.