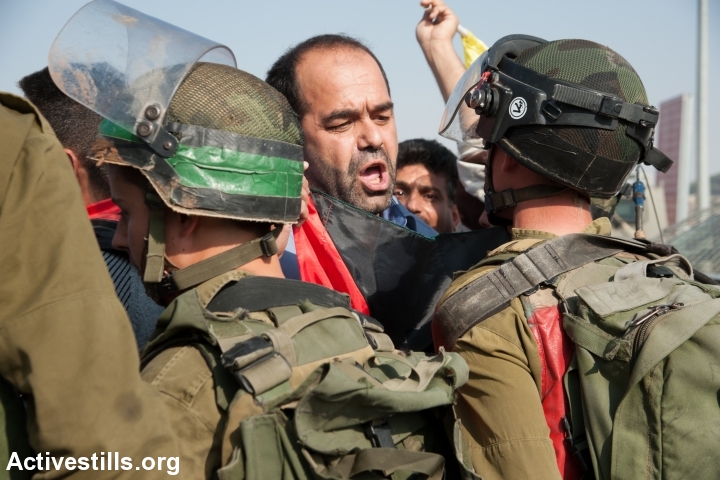 On Friday Israeli troops shot and injured 17 civilians with so-called ‘non-lethal’ ammunition. Among those injured were children and journalists, who were present during anti wall and settlements protests that were organized at a number of West Bank communities.
Fourteen residents among them six children and a journalist were injured when troops attacked the weekly anti wall protest at the northern West Bank village of Kufer Kadum. Troops attacked protesters at the village entrance. All the injured were hit by rubber-coated steel bullets fired by Israeli soldiers.

In central West Bank, protests were organized in the villages of Bil’in, al Nabi Saleh and Nil’in. Residents and their international supporters from Bil’in and Nil’in villages managed to reach the Israeli wall before they were attacked by Israeli soldiers.

Meanwhile Israeli troops attacked the protest in al Nabi Saleh before even leaving the village and later invaded residents homes and fired tear gas inside.

Three residents and a journalist were injured by rubber-coated steel bullets fired by Israeli troops in the village of Bil’in. In al Nabi Saleh and Nil’in many were treated for the effects of tear gas inhalation due to Israeli soldiers attack.

Earlier on Friday morning in the central West Bank, local activists managed to demolish parts of the Israeli wall near the village of Bier Nibala. The international court of Justice in 2004 deemed the Israeli wall built around the West Bank as illegal and said that it should be demolished.

Elsewhere, at al Ma’ssara village, Israeli troops stopped the villagers and their supporters at the village entrance then forced them back using rifle buts and batons, no injuries were reported.