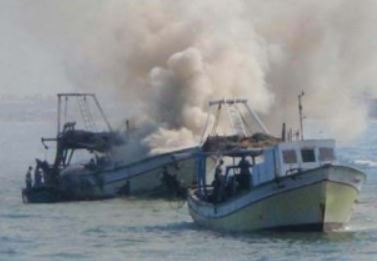 Israeli navy boats opened fire, on Tuesday at dawn [November 19, 2013] at a number of Palestinian fishing boats near the Gaza coast causing damage but no injuries.Eyewitnesses said that the fishermen had to sail back to the shore fearing additional assaults by the army.

Palestinian fishermen in Gaza are subject to frequent violations and assaults by the Israeli navy that attacks them even within the six miles allotted to them. The attacks led to dozens of casualties, arrests and significant damages to the boats.

In related news, a number of armored Israeli military vehicles, including six military bulldozers, carried out a limited intrusion into an area east of Khan Younis, in the southern part of the Gaza Strip.

Eyewitnesses said that the army used smokescreens while invading the area, and that the soldiers conducted searches.

The invasion targeted an area where, on October 31, three fighters were recently killed, while four Israeli soldiers were injured during clashes with Palestinian fighters.