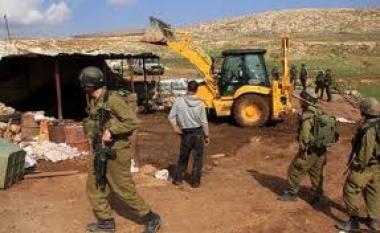 Israeli Soldiers invaded, on Thursday morning [November 21, 2013], the Deerat village, east of Yatta in the southern West Bank city of Hebron, and illegally confiscated seven dunams of Palestinian lands, in order to pave a road for Jewish settlers.Coordinator of the Popular Committee Against the Wall and Settlements in Hebron, Rateb Jabour, stated that the army carried maps showing the newly planned settlers-only road that would split the village and lead to the destruction of several houses.

Jabour added that the homes are part of the village, but that Israel considers them to be out of the zoning area. The road would lead to the illegal annexation of thousands of Palestinian dunams in the region.

Also, on Thursday, soldiers kidnapped Mohannad Al-Mohtaseb, 17 years of age, from the Old City of Hebron.