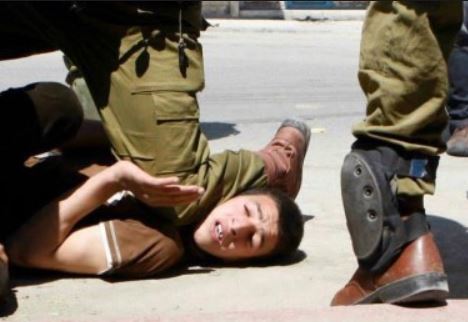 [Wednesday Evening November 20 2013] Israeli soldiers invaded Silwan town, in occupied East Jerusalem, and kidnapped an 11-year-old child after alleging that he hurled stones at them.The child has been identified as Malek Da’na; his father said that the soldiers broke into a barbershop in Ein Al-Loza neighborhood, in Silwan, and kidnapped Malek after cuffing him. The child was moved to a police station on Salah Ed-Deen Street, in Jerusalem.

The child’s mother went to the station to see him, but the police withheld her ID card and, then, proceeded to interrogate her.

It is worth mentioning that Israeli soldiers kidnapped, on Wednesday, more than 23 Palestinians in different parts of the occupied West Bank.

Most of the kidnapped were taken prisoner after the soldiers violently broke into their homes, ransacking their furniture and belongings, during the dawn hours. A number of the kidnapped Palestinians were children.