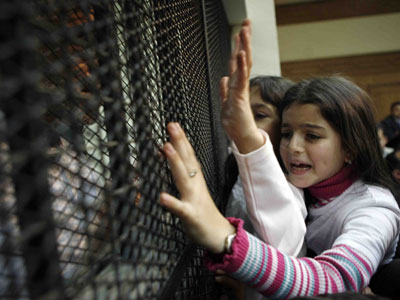 Palestinian Researcher specialized in detainee’s affairs, Abdul-Nasser Farawna, stated that the Israeli occupation army is still holding captive 4,900 Palestinians in 17 prisons, prison camps, detention and interrogation facilities. Among the detainees are children, disabled, elderly and legislators.The researcher, who also heads the census department of the Ministry of Detainees, said that Israel is currently holding captive 190 children, and that the total number of children kidnapped and imprisoned by Israel, since September 2000, exceeds 10,000.

In his report, Farawna said that there are 14 women, held by Israel, who face continuous violations and bad treatment. One of them is Lina al-Jarbouni, who has been jailed for more than 11 years.

The study also indicates that there are 495 detainees who are serving at least one life-term, including the longest serving detainee, Abdullah Barghouthi, who was taken prisoner on March 5, 2003, and was sentenced to 67 life terms and an additional 250 years.

Farawna said that Israel has continued its violations against democratically elected legislators, currently holding captive 14 legislators and 1 former minister; all held without charges. Israel has kidnapped and imprisoned more than 60 legislators and ministers over the past ten years.

The oldest amongst them is Karim Younis who was kidnapped 31 years ago.

Farawna said that ailing Palestinian prisoners are facing very harsh conditions and being deprived of their basic right to both essential and specialized medical treatments. There are more than 1,500 ailing detainees, including 20 permanently held at the Ramla Prison Clinic, which lacks basic equipment and supplies.

Those detainees suffer with various conditions, including paralysis, heart disease, cancer and other conditions.

The Palestinian official further stated that 205 Palestinians have died in prison since 1967. Some of them were tortured to death, while others died due to lack of medical attention. Others were shot and killed after being captured.

The latest casualty was Hasan Toraby, 22 years of age, who suffered with several serious health issues, and died at the Al-‘Affoula Israeli Hospital after being denied essential medical treatment. He was merely moved to a hospital after a serious deterioration in his condition.

Dozens of Palestinians have died after being released from prison, due to numerous health issues they faced while in prison, but having never received the needed medical attention until after they had been freed. Among them are detainee Morad Abu Sakout, Hayel Abu Zeid, Ashraf Abu Threi’, and Zakariyya Issa.

Farawna urged all international human rights groups to support the detainees, especially amidst the ongoing and escalating abuses against them, as they are in direct violation of International Law and all related international resolutions.