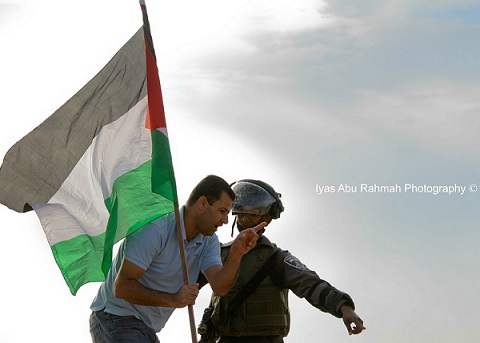 Israeli soldiers attacked on Friday [November 22 2013] nonviolent Palestinian protesters at the Kabsa Junction, between the Al-Ezariyya, Abu Dis and Al-Isawiyya towns, in occupied East Jerusalem, and fired at them leading to several injuries.Spokesperson of the Popular Committee Against the Wall, Hani Halabiyya, stated that dozens of residents marched on Friday evening, chanting slogans against the illegal wall, settlements and ongoing Israeli violations.

He added that the soldiers fired several rounds of live ammunition, gas bombs, rubber-coated metal bullets and glass bullets at local youths who burnt tires and hurled stones at them.

Furthermore, several Palestinians have also been injured during clashes that took place near the Qalandia junction, north of Jerusalem.

Medical sources have reported that rubber-coated metal bullets and fragmentation of concussion grenades injured several Palestinians, during clashes that took place in the Al-Isawiyya town, in occupied East Jerusalem.

The Higher Follow-up Committee in the town said that dozens of soldiers invaded the town during late evening hours, closed various roads and conducted provocative acts that led to clashes.

Some of the wounded were moved to local clinics, while two were hospitalized after being hit by rubber-coated metal bullets to the head and mouth.

On Friday afternoon, protests were organized in the central West Bank villages of Bil’in Ni’lin, and Nabi Saleh, near Ramallah, as well as the Al Ma’sara village, near Bethlehem.

In the villages of Bil’in, and Nil’in residents and their international and Israeli supporters managed to reach the Israeli wall built on lands leased from local farmers.

In Nabi Saleh village, Israeli troops used tear gas and chemical water that generate bad smell to attack residents and their supporters before they managed to march out of the village.

Many civilians were treated for the effects of teargas inhalation in the three villages.

Furthermore, dozens of soldiers invaded the village of al Nabi Saleh and fired tear gas at local homes causing many residents, including children, to suffer the effects of tear gas inhalation.

In the al Ma’sara village, near Bethlehem, soldiers stopped the weekly anti wall protest at the village entrance, and forced people back into the village using rifle butts, and batons to push people back.