UN Declares 2014 Year Of Solidarity With The Palestinians 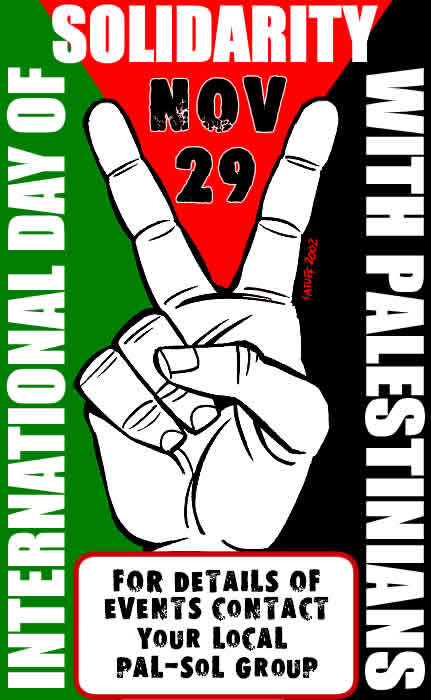 The United Nations has declared the year 2014 as a “Year of Solidarity with the Palestinian People”, after the resolution passed by 110 votes, with seven countries opposing and 54 abstaining. The UN said it will be working with various governments, organizations and civil society institutions, in 2014, to ensure the urgently needed support to the Palestinian people.

In a message read on his behalf, UN Secretary General Ban Ki-Moon called on world countries to translate their solidarity with the Palestinian people by working together for justice and peace.

The message of Ki-Moon stated that Israel’s occupation of the rest of historic Palestine in 1967 must end, and stressed on the importance of establishing a sovereign, independent and viable Palestinian State based on the 1967 borders, “living side by side in peace with Israel”.

It affirmed that Jerusalem must be the capital of the two states after achieving arrangements “acceptable by all parties”, and stressed the urgency of finding a solution for millions of Palestinian refugees who have been displaced by Israel, before and during its establishment throughout 78 percent of the historic land of Palestine in 1948.

“We cannot afford to lose the current moment of opportunity,” Ban Ki-moon said in his message, “The goal remains clear – an end to the occupation that started in 1967 and the creation of a sovereign, independent, and viable State of Palestine based, living side by side in peace with a secure State of Israel’.

In November of 2012, the United Nations General Assembly voted in favor of granting Palestine an observer status, a move which indirectly resembled a UN recognition of Palestine as a state. The resolution passed by 138 votes, with nine including the US vote against, and 41 countries absenting.

Israel and the United States were angered by the move, considering it “counterproductive”. Israel then stopped the transfer of tax money it collects on behalf of the Palestinians at border terminals, and the US froze its financial support.

The remaining 22% of the land of Palestine, including East Jerusalem, fell under Israeli occupation in 1967, in direct violation of International Law. Now, Israel’s illegitimate settlements, with its annexation wall, have turned the territories into isolated cantons.

Israel continues to build and expand its illegitimate settlements, an issue which presents the biggest obstacle to peace talks, in addition to its refusal to recognize the internationally guaranteed Palestinian rights of statehood and independence.
—–

In 1977, the UN General Assembly called for the annual observance of November 29 as the International Day of Solidarity with the Palestinian People (resolution 32/40 B).

On that same day, in 1947, the assembly adopted the resolution on the partition of Palestine (resolution 181 (II)).