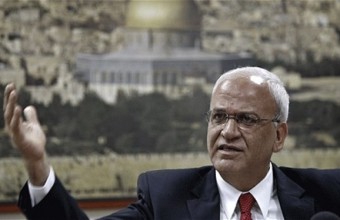 Chief Palestinian negotiator Saeb Erekat rejected, on Thursday, a decision by United States officials to extend the April deadline for reaching a framework peace deal in nine months.The US stated that the reason for the extension was because Israel was acting in ‘good faith’, the PNN reports.

However, Erekat argued that ‘there is no meaning to prolonging the negotiation, even for one more additional hour, if Israel, represented by its current government, continues to disregard international law.’

He made reference to Israel’s continued construction of illegal settlements in the West Bank.