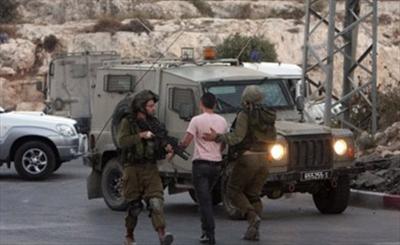 The soldiers also invaded Kharouba neighborhood in Jenin city, and kidnapped Mahmoud Jihad Hanthawy, 26, after breaking into his home and the homes of his brothers; soldiers violently searched the grounds and interrogated the families.

The Palestinian News & Info Agency (WAFA) has reported that the soldiers ransacked the homes of Mohammad Hasan al-Amayra and Sami Jabil Rahoub, and the home of Yousef Ikhdeir, in Doura.

On Wednesday evening, clashes took place between local youth and Israeli soldiers who invaded Safa and al-Ein areas, in Beit Ummar, and the Tabaqa village, south of Hebron.

Soldiers also stopped and searched several Palestinian cars and searched them while inspecting the ID cards of the passengers.
In related news, the Palestinian Prisoners Society (PPS) reported, Thursday, that Israeli soldiers assaulted detainee Omar Suleiman Daraghma, 18, from Tubas, after kidnapping him two days ago.

The PPS said that Daraghma was bleeding heavily, suffering various cuts and bruises, after being beaten on his head, face and arms, and that the administration at Huwwara Prison refused to admit him, due to his injuries.