Three Injured After Being Attacked By Israeli Settlers 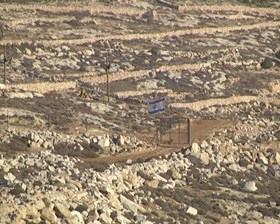 [Thursday Morning, March 6, 2014] Palestinian medical sources have reported that two Palestinians were injured after being assaulted by Israeli settlers in the al-Mogheer village, north of the central West Bank city of Ramallah. Ghassan Daghlas, in charge of the Israeli Settlements file at the Palestinian Authority, in the northern part of the occupied West Bank, said that settlers from the Kochava Shakhar illegitimate settlement attacked three Palestinians, causing various cuts and bruises.

Daghlas added that the Palestinians were attacked south of the al-Mogheer village.

The three have been identified as As’ad Sami Na’san, Diab Na’saan and Haitham Hajj Mohammad.

They were moved to the Ramallah Hospital suffering moderate-to-serious injuries.

Radio Mawwal in Bethlehem has reported that the uprooted land, belonging to Abu Sway family, had an Israeli military tower that was removed by the army a week ago, and that the army returned to the area and uprooted the lands, apparently to install a military base.