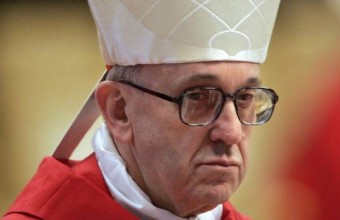 The Israeli Foreign Ministry said that, according to the Vatican, the pope’s visit won’t be able to be rescheduled, only cancelled.

In a related context, Ma’an News Agency reports that hundreds of peace activists, church leaders, evangelical Christians and academics will meet in Bethlehem, on Monday, for five days of dialogue and discussion about the role of Christian Zionism in the Israeli-Palestinian conflict.

Al Ray Palestinian Media Agency reports that, this past Wednesday, Palestinian workers held a protest to lift the ban on construction materials and the eight-year siege on Gaza, calling the international community to support the workers’ cause.

During the protest, which was organized by the Supreme National Committee and General Association of Palestinian Workers’ Syndicates, in front of an under-structure building.

The workers hoisted banners such as, ‘What is our sin to be deprived from building our homes and renovating our streets?’, ‘Gaza tests the Arab chivalry and humanitarian justice’, chanting: ‘Lift the siege on Gaza and eight years of construction materials ban.’

MP Marwan Abu Ras said that work in many sectors has been halted due to the ban of construction materials, in addition to a large number of other related sectors that play significant role in promoting the process of reconstruction in the besieged enclave, calling the Muslim and Arab world to take a serious stand to support the Palestinian workers.

Sami el-Amassi, President of General Association of Palestinian Workers’ Syndicates, said that maintaining the stranglehold and tightened siege over the Gaza Strip has produced a high rate of unemployment, with an estimated 45% and 150,000 jobless people, stating that all of this is crystal clear to the Muslim and Western worlds which haven’t done anything to support Gaza.

Regarding the workers’ suffering in Gaza, el-Amassi said that the continuing crises, which has exceeded all limits, left 30,000 workers jobless in the construction sector, and another 40,000 in other related sectors.

El-Amassi added that the siege has forced 97% of industrial facilities to close and 35,000 workers to be laid off, among them 7,000 workers in the metal industries, in addition to a prolonged suffering of more than 40,000 farmers and the closing of 100 textiles factories, resulting in 1,000 workers being laid off.