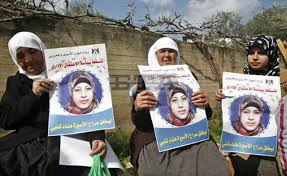 The Head of the Census Department at the Palestinian Ministry of Detainees, Abdul-Nasser Ferwana, stated that, since 1967, Israel has kidnapped and imprisoned more than 15,000 women, including 1,000 since 2000, and that 21 women are currently held by Israel. Ferwana stated that the army has kidnapped mothers, wives, children and ailing women, subjecting them to torture and very difficult conditions.

He said that 21 women are currently held by Israel, and that the longest serving is Lina Jarbouni, who was taken prisoner twelve years ago, and was sentenced to 17 years imprisonment.

Arresting and imprisoning women is part of Israel’s policy of targeting Palestinians and subjecting them to extreme torture, abuse and harassment.

“The arrests escalated after the beginning of the al-Aqsa Intifada, in late September 2000. This is a form of collective punishment and is in direct violation of International Law”, Ferwana said. “In many cases, women are kidnapped by the army to force wanted Palestinians to surrender, or to pressure detainees to provide information and to make up confessions.”

The official further said that all detained women are subjected to physical and psychological humiliation and, in many cases, are sexually harassed.

“They are also tortured, placed in solitary confinement for days, and even months”, Ferwana stated. “They are placed in dark rooms, and face harassment by prison guards.”

The official also said that the female detainees are subject to an organized campaign of abuse, and their rights are constantly violated.

Ferwana saluted all Palestinian women, all former and current female detainees, and said that, as the world marks International Women’s Day, Palestinian women continue to play an essential role in the Palestinian struggle against the Israeli occupation.

“They are defending our dignity, the dignity and freedom of the Palestinian people. They continue to play an important role in the struggle”, Ferwana added. “They have been killed by the army, wounded, imprisoned and even forced into exile, but they have never surrendered, and continue to fight for the liberation of their people.”

He stated, “As women around the globe mark International Women’s Day, we need to remember the suffering of Palestinian women, facing oppression and attacks by Israel’s army and settlers, in occupied Palestine, we need to act and pressure Israel into releasing all detained women, and stop targeting them.

Palestinian women are an essential part of the struggle against the illegitimate Israeli occupation of Palestine. Many have helped lead the struggle, and continue to be a very important part of the revolution for liberation and independence.

Hundreds have been killed by Israeli fire and shells, thousands were injured, and they continue to face aggression by the army and fanatic settlers, but they never surrendered, and their steadfastness and courage inspire entire generations.“