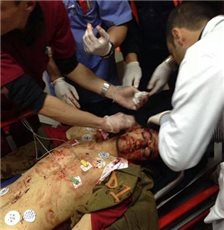 His family said the barn is close to a bypass road used by Israeli soldiers and settlers, and that he always heads there to feed the sheep.

The family rejected Israeli military claims alleging he threw stones at settlers’ vehicles, and that such claims are only meant to justify the cold-blooded murder of their son.

It is worth mentioning that the soldiers held the body of Darwish for more than an hour before finally handing it back to the Palestinians.

His family said the burial ceremony would be held on Tuesday in his village.

Earlier on Monday, Israeli forces, stationed at the Allenby Border Terminal with Jordan, shot and killed a Palestinian Judge who works in Jordan.

The slain Palestinian has been identified as Raed Ala’ Ed-Deen Zieter, 38, from the northern West Bank city of Nablus.

He also holds Jordanian citizenship; Jordan denounced the killing of the judge and demanded Israel to initiate and investigation into the fatal shooting.

Saji Darwish, 20, was hit with a live round in his head. Medical sources announced that Darwish died instantly and was moved to Ramallah city hospital.

Earlier on Monday morning, Israeli forces shot and killed a Palestinian man at the Allenby Bridge crossing with Jordan, on Monday, Israel’s army and witnesses said.

An Israeli army spokeswoman claimed that the man attempted to the seize the weapon of an Israeli soldier at the Allenby Bridge crossing with Jordan. The victim was identified as Raed Ala’ Ed-Deen Zieter, 38, from Nablus.

A Jordanian security official told AFP that Zeiter worked as a judge in Amman and had left for the West Bank, early on Monday. The Palestinian Authority strongly condemned the incident and demanded an international investigation into the circumstances of Zeiter’s death.