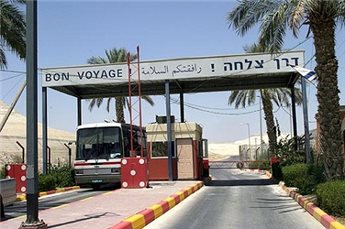 An Israeli soldier shot and killed a Jordanian judge, identified as Raed Z’eitar,, at the Jordan River border crossing between Jordan and the West Bank on Monday.Details about exactly what happened at the border Monday morning are still unclear, but the Israeli military has acknowledged that Z’eitar, was unarmed when he was shot and killed by multiple rounds from several soldiers.

Although the Israeli military issued a statement claiming that the unarmed man ran toward a soldier at the border crossing shouting ‘Allahu Akbar’, eyewitnesses contradict this account.

The Israeli military issues statements after every shooting incident that claim soldiers acted in self defense, and although these statements are often retracted later when the details of these incidents emerge, the international and Israeli media generally reports the original army statements as fact, and fail to report the later retraction.

Z’eitar was crossing from Jordan into the West Bank at the Allenby Bridge border crossing, which is known to be a difficult border crossing for Palestinians and other Arabs, and the site of a number of other incidents of Israeli troops shooting unarmed civilians.

Following the killing of Raed Z’eitar, protesters gathered at the Israeli Embassy in Amman, Jordan to demand justice. They called for the extradition of the soldiers who shot Zueter, and the cancellation of the peace agreement between Israel and Jordan established in 1994.

The Jordanian Foreign Minister Nasser Judeh summoned the Israeli ambassador in Jordan and demanded an investigation of the incident.

Palestinian officials demanded an independent investigation carried out by entities outside the Israeli military. The Palestinian Authority statement noted that this is the latest in a series of violations of human rights by Israeli authorities recently.

Israeli forces shot and killed a Palestinian man, at the Allenby Bridge crossing with Jordan, on Monday, Israel’s army and witnesses said.

An Israeli army spokeswoman said that ‘a Palestinian attempted to the seize the weapon of an Israeli soldier at the Allenby Bridge crossing with Jordan. Israeli soldiers opened fire and a hit was identified.’

The victim was identified as Raed Alaa Addin Zueter, 38, from Nablus.

A Jordanian security official told AFP that Zueter worked as a judge in Amman and had left for the West Bank, early on Monday.

Jordan’s justice ministry confirmed the information, saying that he worked at a magistrates court in the capital.

Palestinian security officials said that Zueter was originally from the northern West Bank city of Nablus, but had left the territories in 2011 and not returned since.

Family members in Amman expressed shock over his death.

‘We did not know that Raed was in the West Bank. I went to the court to check if he was working and I was told that he did not go to work today,’ said his 70-year-old father, Alaa Zeiter, himself a former judge.

‘My son is peaceful and professional. I am shocked,’ he told AFP by phone, before breaking down in tears.

The Palestinian Authority strongly condemned the incident and demanded an international investigation into the circumstances of Zueter’s death.

‘The Palestinian government vigorously condemns the shooting at close range of Judge Raed Zueter… while he was coming in from Jordan,’ it said.

It also called for the establishment of an ‘international investigative committee to probe this incident.’