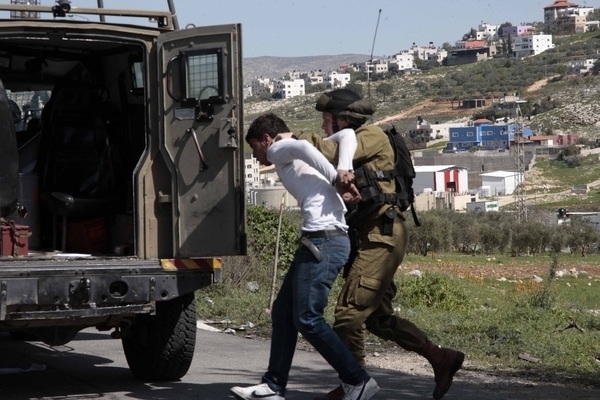 The army invaded various neighborhoods in the city, installing roadblocks at the entrances of Sa’ir town, north of Hebron, the Halhoul Bridge, and the al-Fawwar refugee camp, south of the city, stopping and searching dozens of vehicles and interrogated the passengers.

Dozens of Israeli military vehicles also invaded Nablus city, in the northern part of the West Bank, the al-Ein refugee camp and the al-Makhfiyya area, in the city, kidnapping three Palestinians.

Local sources have reported that the soldiers invaded the al-Makhfiyya area, west of Nablus, broke into the home of Dr. Mohammad Shareeda, and kidnapped his son Hotheifa, 21 years of age.

The soldiers also violently searched the property, and confiscated computers and a mobile phone.

One Palestinian, identified as Mohammad Basyouni, 21, was kidnapped after the soldiers invaded and searched his home in the Ein Beit al-Maa’ refugee camp, in the city.

Another Palestinian, identified as Ahmad Suleiman Othman, age 28, was kidnapped from his home in the al-Majdal village, south of Nablus.